Strange Horizons Reviews "The This"; and Other News 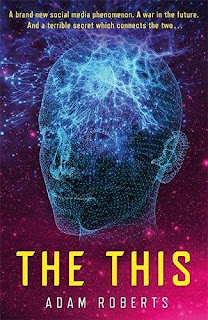 Prashanth Gopalan finds The This to be ‘a wildly imaginative novel, a thought experiment on morality and social organization, and a meditation on time and consciousness.’

With its interesting theories about the roots of human social behaviour, organization, and culture, and its intense explorations of life within a hivemind, The This explores the nature of being and belonging, and what people might be willing to do to find belonging when they reach the limits of social atomization, language, and technology-based connection. This is an intricately constructed science fiction novel deserving of wider readership. I found myself constantly marveling at what Roberts was doing as I made my way through it. Judging by the plots of his other books, Roberts is an exciting and underrated author, whose works featuring picaresque protagonists, grand themes, and erudite philosophical explorations may help us navigate the complex moral choices we face at a time when our future as a species feels increasingly uncertain—and unearth startling, if unsettling, visions for how we could reimagine ourselves as a society for the sake of our survival

It’s pleasing to get such a positive review, though I lay my finger on a couple of words in that paragraph—‘underrated’ and ‘deserving of wider readership’—and find within myself the capacity for gloom. But that’s just me. Twenty three novels into a novelist’s career if he or she is not rated and are lacking a wider readership, they probably won’t be and won't pick up one. That’s fine: there’s plenty of brilliant, widely-read and highly esteemed SF being published at the moment, which is the important thing.
Talking of which, the 2022 Arthur C Clarke Award shortlist has been announced. [update: here's a link to my round-up post on this year's shortlist]. We're in the midst of SF Award Season at the moment. For instance, we're a month away from finding out which of the 2022 finalists win their respective Hugos. The Nebula has been and gone, and the SFRA Awards, formerly the Pilgrim Awards (for SF scholarship) have just been announced. Delighted to see my friend Roger Luckhurst, a brilliant scholar and critic of SF (among other things) given the lifetime achievement award.
No awards or award-nominations for me again this year, but I'll be honest: where once that fact used very much to depress and dishearten me, I'm increasingly coming to terms with it. Awards are marks of community esteem and my lack of them merely reflects that my writing isn't especially estimable, or isn't judged so by the community. Of course, with any one specific award it's possible for my amour propre and ego to equivocate: I've been involved in award-judging many times, and it's not an exact science, good novels are often omitted from shortlists and so on. The cumulative effect, though, is harder to handwave away. There are a huge number SF awards after all, handed out annually, and to miss them all, year in year out, really does suggest an unavoidable collective judgment regarding some deeper problem in what I do. I have moved beyond ‘maybe I'll be nominated next year, if I write a better book’ to ‘I'm clearly never going to win a Clarke, Hugo, Nebula, Pilgrim [insert prize name here]’. If it were going to happen, it would have happened already. Now, to the extent that there's anything of interest in all this, it's only in the inside-baseball sense of how a writer deals with ongoing failure. Many more writers fail than succeed (in terms of awards, or sales, or readership) and to carry on the work we need to evolve strategies of coping with that fact, for it is of course sapping to think that what one writes is crap, destined to be ignored, beneath contempt. Of course, and by the same token, I'm well aware that the last thing SF as a culture needs right now is ostentatiously to foreground yet another middle-aged straight white dude. As a fan of SF (and I'm always a fan of SF before I am a writer of SF) I'm very happy with where the genre is at the moment. It's not a collective-SF problem, it's a me problem: I need to square the personal-esteem circle. And speaking for myself, I have always, as a writer, been more interested in failure than success. It seems to me more interesting, aesthetically and ethically, truer to the human condition, in a way more beautiful than success. As my friend Rich Puchalsky put it, a few days ago: 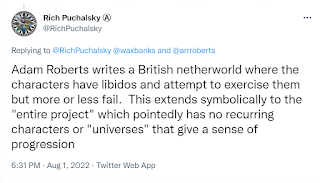 Netherworld of fail: c'est moi. Hurts, of course, on a personal level. But that's not the end of the world. And I'm in a much better place where that is concerned than I have been for years.
Other news: I'm talking with a publisher about maybe writing a History of Fantasy, as a sort-of companion volume to my History of Science Fiction (2nd ed. 2016), which will, if it comes off, keep me busy over the coming academic year. And I am finishing a new novel, concerning which I'll say more later, perhaps.
Posted by Adam Roberts at 23:50 1 comment: