E. S. Holden ['Bright Projections at the Terminator of Mars', Publications of the Astronomical Society of the Pacific (December 1894), 284-5] records some strange happenings:


Bright Projections at the Terminator of Mars.

The writer of an unsigned article in Nature for August 2, 1894 (page 319) was apparently first made aware of the fact that bright prominences are to be seen at the terminator of Mars by a note printed in the Astronomische Nachrichten, No. 3245, describing such observations at the Observatory of Nice on July 28. If he had consulted Astronomische Nachrichten, No. 3241, a month earlier, he might have read an account of their observation at the Lick Observatory on June 28. The Publications of the Astronomical Society of the Pacific, Vol. VI, page 103, contains a paper by Professor Campbell which recites the whole history of such appearances, which should be, one would think, fairly familiar to observers of Mars by this time. True prominences were first observed at the Lick Observatory in 1890; and at the Lick Observatory, at Nice, and at the Arequipa Observatory in 1892. The first prominences of 1894 were seen at Mount Hamilton on June 28, and they have been observed more or less constantly since that time, and will probably be seen after opposition also.

Bright prominences on Mars are of two kinds. The first kind is caused by pure irradiation of a bright region on the terminator over into the adjacent darkness. Such prominences are, therefore, entirely optical in their origin. M. Terby, in 1888, described such appearances ; and they had long been known in connection with the bright polar caps. The second kind of prominences corresponds to elevated regions, highly illuminated, on the planet's surface, which actually project beyond the terminator. They may, conceivably, be due either to clouds or to mountains. The Mount Hamilton observations of 1890 might very well have been explained by the presence of a streak of clouds at a great altitude. (See Publications A. S. P., Vol. II, page 248.)

All the later observations made here by Professors Schaeberle, Campbell, and others, seem to indicate that these veritable prominences are caused by mountain chains lying across the terminator. The prominences appear in the same longitudes and latitudes on the planet night after night and even month after month ; and a map of some of these chains is in preparation. Professor Campbell has shown that the heights of some of these mountains are not over 10,000 feet, and the heights of others appear to be of the same order of magnitude. At the Lick Observatory and at Nice, no observations of bright prominences at the full limb of Mars have been made. There is not the slightest doubt as to the phenomena; and I think there can be no question that the foregoing explanation is correct.

The writer of the article in Nature was clearly not familiar with the literature of the subject. His remarks are given under the striking title " A Strange Light on Mars." After reciting the telegram from Nice he concludes that the news must be accepted seriously and further details awaited anxiously. He concludes further that the light " must either have a physical or a human origin ; so that it is to be expected that the old idea that the Martians are signaling to us will be revived." Of physical origins he suggests three, namely aurora, a long range of snow-capped hills, and forest fires. Irradiation is not mentioned. " Without favoring the signaling idea, before we know more of the observation, it may be stated that a better time for signaling could scarcely be chosen."

It will probably appear unnecessary to anyone who has read the article by Professor Campbell, previously cited, to go so far afield for explanations. To anyone who has actually observed the phenomena in question, night after night, as has been done by all of us at Mount Hamilton, the suggestion that these prominences are signal lights from (possible) inhabitants of Mars is simply preposterous. I can find no milder term.

There are at least five or six telescopes in England which will show these prominences, and as many more on the Continent. So far as I know they have been seen in 1894 only at Mount Hamilton, Nice, and at the Lowell Observatory in Arizona.

Not aliens, then: they didn't even think so in 1894. But wait -- look again at the picture with which the article is illustrated. 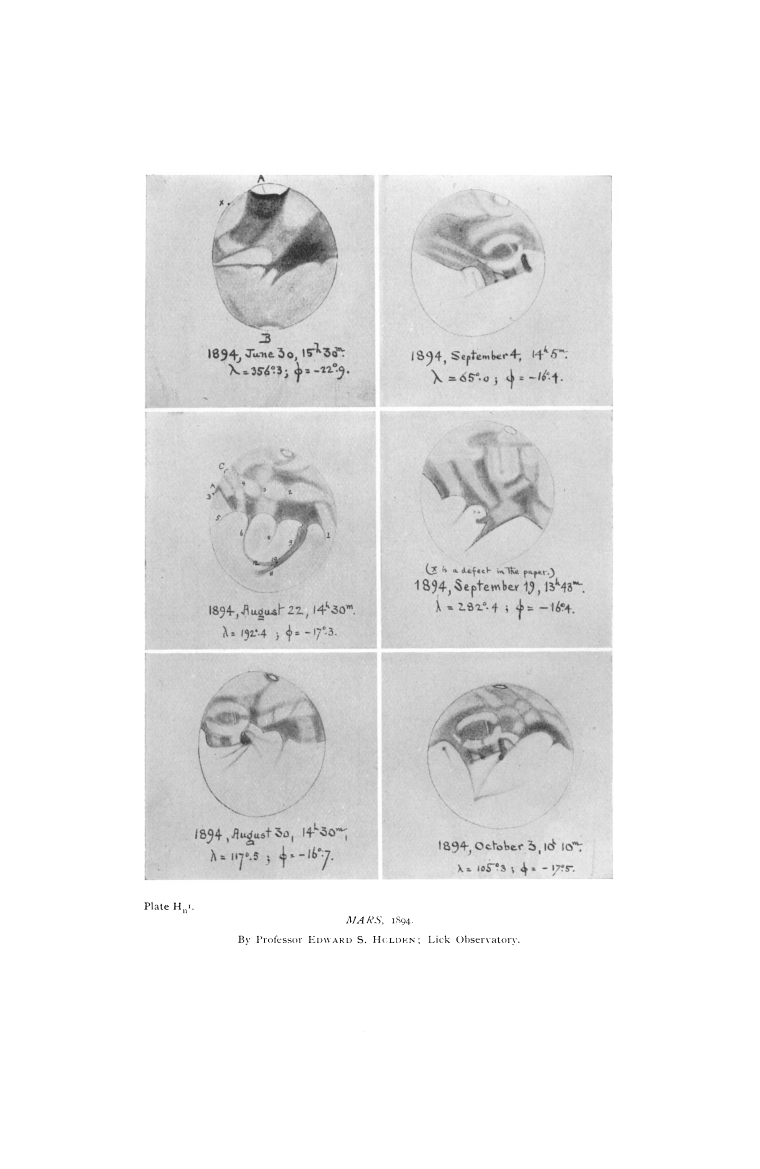 I like the little cartoon ghost poking his smiley head in the middle-right image. Well hello there!