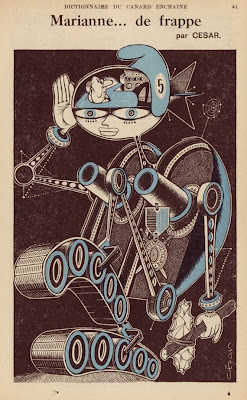 This is from a 1962 French satirical publication, Dictionnaire Canard (I found a bunch of scans from early 1960s issues of these at the Multiglom blog, here). It's Marianne, the French national emblem, reimagined for the nuclear age ('Force de Frappe', 'Strike Force', was De Gaulle's plan for French military forces to be organised to include nuclear weapons, part of his 'Force de dissuasion' rationale of strategic deterrence). You can see the Robot Marianne's head is full of a saucily posing De Gaulle, in sexy sweater and tie combo. But what a splendid piece of robot art this is! Click to embiggen.
Posted by Adam Roberts at 05:15