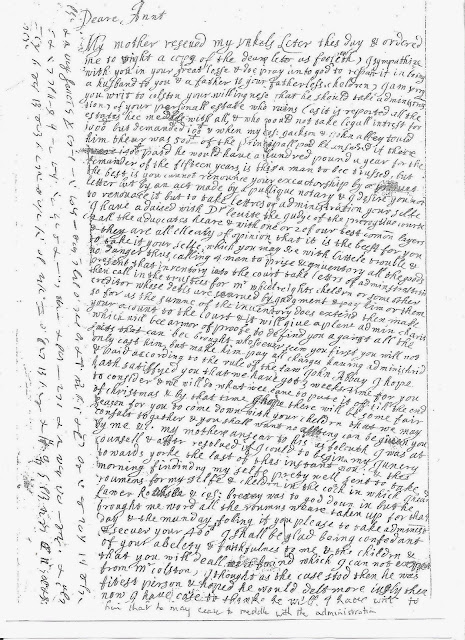 This rather interesting MS letter has been sent to me (or a scan of it has, which amounts to the same thing in this our digital 21st-century). I'm told the letter has been dated to 1670; I'm not sure where this date has come from, actually; but judging by the content and the style of the piece it is presumably then or thenabouts. Here's a transcript of the main body of the text:

My mother rescued my unkels Let[t]er this day & ordered me to write a copy of the dean’s letter as followeth > I sympathize with you in your great losse & doe pray unto god to repair it in being a husband to you & a father to your fatherless children > I am sorry you writ to colston your willingness that he should take administration of personall estate who ruins (as it is reported[)] all the estates hee meddles with all, & who would not take legall intrest for £1000 but demanded £100 & when my cos: jackson and john abbey tould him theyr was £500 of the principall he answered if there were £400 he could have a hundred pounds a year for the remainder of the fifteen years, is this a man to be trusted, but the best is you cannot renounce your executorship by a private letter but by an act made by a publique notary & I desire you not to renounce it but to take letters of administration yourselfe[.] I have advised with Dr levitt the judge of the prerogative courte & all the advocates heare & with one or 2 or our best common lawyers & they are all cllearly of the opinion that it is beest for you to take it your selfe, which you may doe with littele trouble & no danger this, calling 4 men to prise & inventory all the goods[,] present that inventory to the court[,] take lettrs of administration then call in the trustees for mr wheelreights children or some other creditor whose debts are secured by judgement & pay him or them so far as the summe of the inventory does extend[,] then make your account to the court & it will give a plene administravit which will bee armor of proofe to defend yourself against all the suits that can bee brought[,] whosoever sues you first will not only cost him but make him pay all charges having administered & paid according to the rule of the law[.] John Abbay I hope hath satisfyed you that we have got 3 weeks time for you to consider & we will do what wee can to pute it off till the end of christmas & by that time I hope there will be some fair season for you to come down with your childrn that we may consult together & you shall want no assisting [that] can be given to you by me[;] & my mothers ansear [answer] to his as folowth: I was at counseil & after resolved if it could be begin my junery [journey] towards yorke the last of this instant month & this morning findingng my selfe pretty well sent to book roumens [rooms] for my selfe & childrn in the coach in which I heard Law[y]er Rouksbe & cos: Bredey was to go down in but he brought me word all the roemns weare taken up for that day and the munday foll[ow]ing[.] if you please to take administration & secuer your £400 I shall be glad being confedant of your ability & faithfulness to me & the children & that you will deall as a friend which I can not expect from Mr colston > I thought as the case stod then he was fitest person & hoped he would delt with me more justly then now I have case to think he will. I have writ to him that he may cease to meddle with the administration.

The reference to 'Prerogative Court' is to the two courts so designated, one in Canterbury and one in York (they were originally part of the authority of the respective archbishops). These had jurisdiction over proving wills and overseeing inheritances. If a will was contested it went to Chancery, but if it was simply a matter of executing it, it went before one of the prerogative courts (until, that is, 1857 when these courts were abolished and their powers transferred to the Court of Probate). But the style of the letter is clearly much earlier than the mid 1800s ... I would say late 17th early 18th century. The Latin in the middle is a legal phrase ("PLENE ADMINISTRAVIT, pleading. A plea in bar entered by an executor or administrator by which he affirms that he had not in his possession at the time of the commencement of the suit, nor has had at any time since any goods of the deceased to be administered; when the plaintiff replies that the defendant had goods, &c., in his possession at that time, and the parties join issue, the burden of the proof will be on the plaintiff.")

Now, this document was sent to me because the sender was puzzled by the marginalia down the left hand side. He thought it might be Greek, and wondered if I could read it. But it's not Greek.

There are a few Greek-y letters in there (the odd alpha, backwards lambda and so on); but it's not Greek. So what is it? I reckon shorthand. (Here's that reputable scholarly source, Wikipedia: 'An interest in shorthand or "short-writing" developed towards the end of the 16th century in England. In 1588 Timothy Bright published his Characterie; An Arte of Shorte, Swifte and Secrete Writing by Character which introduced a system with 500 arbitrary symbols each representing one word. Bright's book was followed by a number of others, including John Willis's Art of Stenography in 1602, Edmond Willis's An abbreviation of writing by character in 1618, and Thomas Shelton's Short Writing in 1626, later re-issued as Tachygraphy.') There's been a certain amount of work on shorthand scripts from the age of Shakespeare, since it's assumed that bad quartos were the result of shorthand writers jotting down plays as they were being performed, and then rushing the notes into print to cash in (hence a knowledge of shorthand might untangle various Shakespearian cruxes). But I have to guess this is different. Two possibilities: one, the writer of the marginalia was moved to add a comment to the letter's disobliging opinion of Mr Colston, and decided to veil his words in code to protect himself from said lawyer's ire; or two (which I think more likely) the letter was at some point entered as evidence in the case to which it refers, or conceivably in some other case, and a clerk of the court, versed in legal shorthand, annotated it for ease of filing or for some other court purpose.

Does anybody know any better? Can anyone decipher the script? It would be cool to know.
Posted by Adam Roberts at 07:45