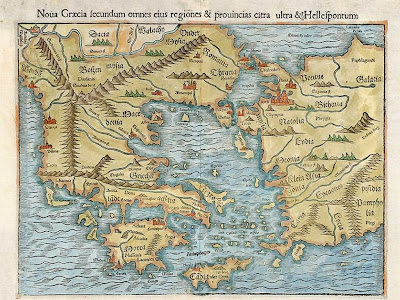 This was the idea:


I had the idea a while ago, and would like to put it into practice (except: oh the labour! and oh -- who would ever want to publish such a thing?) of an anthology of Greek verse translated into an English that marked the historical range of the language in which the originals were written. This came to me after reading an anthology (The Penguin Book of Greek Verse) that translated choice portions of Homer, Hesiod, Aeschylus, Sophocles, Euripides, Hellenistic poets, New Testament, early Christian writings and so on, right up to modern-day Greek poetry, all into the same contemporary-idiom English. That's fine as far as getting at the meaning goes, of course; but it inevitably flattens and erases our sense of the poetry. Because of course the Greek of Homer is two and a half thousand years older than the Greek of Seferis -- as different linguistically as Old English is from blog-speak. 'What would an anthology look like,' I thought to myself, 'that translated Homer into Old English, Hesiod into Chaucerian English, the Attic tragedians into Shakespearian English, Hellenistic poets into the idiom of the metaphysicals (or maybe into 18th-century English) and so on?' It would be a curious and absorbing task to generate so much text; but would the result be worthwhile in any sense?

And these are the posts that resulted in a week-or-so of toying with the idea. I enjoyed myself. Indeed, if I could persuade a publisher to take it on as a project I'd do the whole lot. Not much chance of that, though. *sigh*

The Iliad in Old English

After that, I started to run into redundancy issues: it's possible to find later Greek authors translated into the idiom of the 18th-, 19th and 20th centuries (by English writers working in those centuries), rendering the necessity of my pastiche less pressing. Still I'm glad I did this: there are some nice effects in the Attic tragedians, and -- looking over them again -- I'd say the Sappho results in quite a striking and effective new English poem. But maybe I'm fooling myself.

Another possibility (again: were I plugged into the world of practical theatre, which I'm absolutely not) would be to do the whole of (say) Medea in that rather lovely Elizabethan pastiche English, and stage it. I'd certainly be up for doing that.
Posted by Adam Roberts at 02:11