Death of Charles the Bad, King of Navarre, 1387 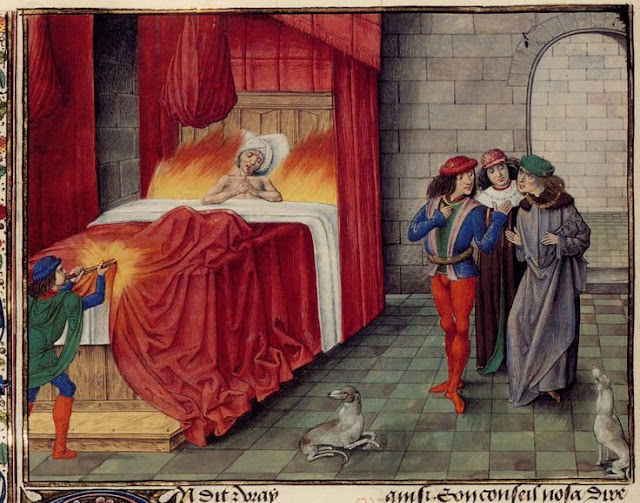 "Charles the Bad, having fallen into such a state of decay that he could not make use of his limbs, consulted his physician, who ordered him to be wrapped up from head to foot, in a linen cloth impregnated with brandy, so that he might be enclosed in it to the very neck as in a sack. It was night when this remedy was administered. One of the female attendants of the palace, charged to sew up the cloth that contained the patient, having come to the neck, the fixed point where she was to finish her seam, made a knot according to custom; but as there was still remaining an end of thread, instead of cutting it as usual with scissors, she had recourse to the candle, which immediately set fire to the whole cloth. Being terrified, she ran away, and abandoned the king, who was thus burnt alive in his own palace. Other versions have his bed set alight by a coal escaping from a metal warming-pan."

I love how the dudes on the right of this image are calmly chatting away, and how unconcerned the dog looks. It's a little like a more extreme, Game-of-Thrones-era version of that painting in Auden's "Musée des Beaux Arts"
Posted by Adam Roberts at 07:22