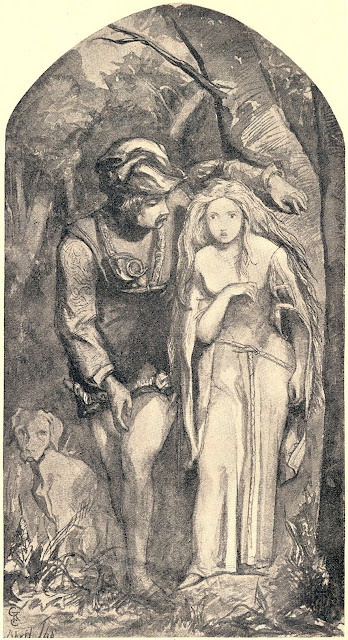 It has only belatedly occurred to me that Keats's ‘Belle Dame' is named for the triple goddess. That is to say, hers is three names in one: the beautiful young maiden (Belle), the mature matron (the Dame) and the old crone (the Beldame). But of course she is.

'La Belle Dame Sans Merci' may be my single favourite short poem in the language.

So, the image at the head of this post is Dante Gabriel Rossetti's 1848 illustration to Keats's poem. I quite like its quasi-mannerist visual punning, such that the Belle Dame herself seems to blend seamlessly into the tree, as if she is some kind of forest spirit, which emphasizes her uncanny, supernatural quality. Cleverer, perhaps, is the knight. His slightly awkward almost-embrace is expressive of both his desire and his reluctance, and the result resembles the topmost arch of a narrow Gothic window, through which the Dame looks to be peering. And if his arm is the frame to a stone window, then it effectively positions him as part of the architecture of a church, and the addition of the little dog in the bottom left is there to put us distantly in mind of those supine stone statues of dead knights, with little stone dogs at their feet. It's all a way of implying without overtly stating that the knight is dead, and the lady Death.

Keats, of course, took his title and mood, if not much else, from French poet Alain Chartier's 856-line 'La Belle Dame sans Mercy' (probably written 1420). This was translated into English by a gentleman called Robert Roos, sometime in the mid 15th-century, and this version was often reprinted. Keats may have read it in Bell's Edition: The Poets of Great Britain (1782); we know that he read various of Bell's anthologies. Roos's version of Chartier's poem opens:

My charge was this, to translate by and by,
(All thyng forgive) as parte of my penaunce,
A boke callid La bel Dame sans Mercy,
Whiche Maistir Aleine made of remembraunce,
Chief Secretarie with the Kyng of Fraunce;
And hereupon a while I stode musyng,
And in my self greatly imaginyng

What wise I should perform the said processe
Considiryng by gode advisement
My unconnyng and my grete simplenesse,
And ayenward the straite commaundement
Whiche that I had; and thus in myne entent
I was vexid and tournid up and doune,
And yet at last, as in condusioun,

I cast my clothis on, and went my waie,
This soresaid charge having in remembraunce,
Till I came to a lustie grene valaie
Full of flouris to see a grete plesaunce,
And so boldly, with ther benigne susssraunce
Which redin this boke, touching this matere
Thus I began, if it plese you to here.

This is the translator (obviously): not the original Alain Chartier. What's interesting about it, I think, is the way it foregrounds the poet as the palely-loitering one. Then the echt Chartier begins:


Not long ago, ridyng an esie paas,
I fell in thought of joyful desperate,
With grete disese and pain, so that I was
Of all lovirs the most unfortunate,
Sith by his dart moste cruill full of hate
The Deth hath take my ladie and maistresse,
And left me sole, thus discomfite and mate,
Sore languishing and in waie of distresse.

And so on. Death, of course. There's an inversion in the way the influence works. In the medieval French poem, it is the lady who is dead; in Keats's version she is alive, and the knight is the one who exists in a sort of half-life. Assuming she is alive, which, as I say above, I don't think is true. Not that she's dead. She is the death that happens to other people.

One question is how far the very un-martial Keats (one K-name) inscribes himself into the Knight-at-arms (another K-name) of his poem.


O what can ail thee, knight-at-arms,
Alone and palely loitering?
The sedge has withered from the lake,
And no birds sing.

Ail brings the dipthong of Keats into the 'K[night]-at-[arm]s' of the poem (we tend to pronounced Keats keets, but he himself and his contemporaries tended to say kaits). Then again, the surname Keats, as the poet certainly knew, derives from the Old English for kite, the bird. If ever a poem was about a bird who fails to take these broken wings and learn to fly, it is this one. 'Sedge' refers to a variety of marsh grass; but sedge is also the term for a group of herons. It also glances as 'saids', as in 'the things said', and which has in this case withered. And no poets sing.

This is a poem (to quote another pop song by the same writer) about a lover, not a fighter. The pun on 'arms' is right there, in the first line: arms to fight with, arms to embrace and love with. Rossetti is drawing attention to precisely that pun in the image at the top of this post: his knight-at-arms abandoning his military arms and draping his actual arm over the lady. 'Palely loitering', perhaps the poem's most celebrated phrase, has always chimed in my ear as a jumbled-up version of 'lonely-poetling'. That, I readily concede, is an idiosyncratic and personal reaction.


O what can ail thee, poet-in-love,
Alone and palely loitering?
What's said has withered from the lake,
And no kites sing.

Wentworth House, where Keats was staying during his annus mirabilis and where he wrote this poem, is not far from a rather nice little lake (277 on the map, below). There's even sedge. 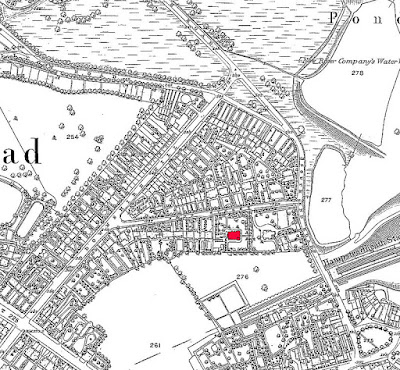