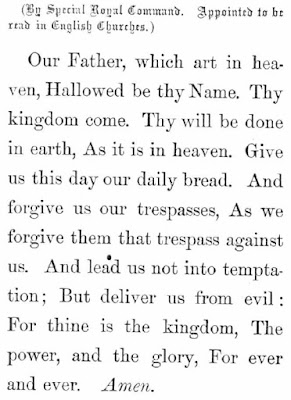 This morning was Harvest Festival at Dan's School. Parents were invited, so at 9:30am I and several score other parents squeezed into a rather overcrowded school assembly hall. All the kids filed in, and we all sang songs and watched various presentations and so on from Years 3 (Dan's year) up to Year 6. The assembly ended with everybody saying the Lord's Prayer, and it occurred to me, not for the first time, what a horrible piece of translation it is.

That's fighting talk, I know. The Book of Common Prayer, like the KJV, is supposed to be one of the few undisputed masterpieces of translation in English. And it is, inarguably, full of the most amazing passages and extraordinary prose. Not this bit, though; which is a more than a little irksome seeing as how this is one of the bits most often read aloud, and usually by many people in unison. And when that happens? Well


And forgive uss sour tresspassssesss ass
we forgive them that trespassssagainssssusss

and the whole room sounds like it's full of snakes. Tennyson used to revise his poetry specifically by eliminating the sibilants, a process he called 'kicking the geese out of the boat'. Somebody might have done some geese kicking here, I think.

I suppose, at a pinch, we might argue that this ghastly hissing in the middle of a core Christian prayer perhaps enacts the jarring, dinning nature of trespass (the snake in the garden, and so on). But it's not a very persuasive argument, really, is it. Quite apart from anything else, the original Greek contains a very low quotient of sibilants: καὶ ἄφες ἡμῖν τὰ ὀφειλήματα ἡμῶν,/ὡς καὶ ἡμεῖς ἀφήκαμεν τοῖς ὀφειλέταις ἡμῶν: all 'h's and 'm's and 'f's and much smoother on the ear.

Whilst we're on this: 'for ever and ever' is a daft repetition: clumsy and a bit infantile. But that's a separate issue.
Posted by Adam Roberts at 14:12