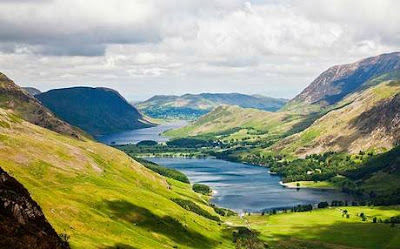 The Latin root of 'excursion' is much more vigorous, rapid, and indeed aggressive than the connotations of the English word now imply: not a leisurely wandering-around pleasant scenery, but 'a running out, an inroad, invasion, a setting out, beginning of a speech' (from excurrere, 'to run out': ex, 'out' + currere, 'to run'). Invasion ('sally, onset, attack') is one of the prime meanings of the word. And, since I've been going over Wordsworth's Excursion (1814) during the winter break, this etymology has more than once come back to me. All the things I used to dislike about this poem—what used to strike me as a ponderous earnestness, plodding dutifulness and preachiness—strike me now as much more estranging, much more attacking. Indeed I tend to think that one of the things Wordsworth is attacking, in this poem, is the very notion of the well-made poem, the diverting or polished well-wrought urn.

Not that Wordsworth is herein presenting a great slab of Ted-Hughesian Natural Granite. Not at all. The Excursion is indeed a very carefully wrought piece of writing, its great length notwithstanding; and in place of great henges of raw nature we get long, long speeches by the various speakers, decorously Miltonic in cadence (if less Latinate in vocabulary than Paradise Lost) and fully engaged in moral-philosophical and social-philosophical issues. But the very relentlessness of these engagements becomes, in its own way, powerfully estranging. We can of course read the poem as a living intervention into actual ethical and metaphysical questions, if we have the patience; or we can read it as a kind of ur-Samuel Beckett drama, in which a small group of pared-down characters, known not by their names but by titles such as 'The Wanderer', 'The Solitary', and 'The Parson' occupy a denuded stage ('we return The Excursion's images to their origins in the known scene,' W L Renwick notes, 'and forget how little Wordsworth needed for his purposes: trees, water, daffodils; a man beside a bare pool; some tumbled stones on a hillside.' [186]). They pass the time in conversation, although, of course, it would have passed in any case, and much of what they say flows over us like Lucky's speech. What they, and we, are waiting for is a particular iteration of Godot known only as 'the Recluse'. But the Recluse never comes.


The Excursion is the longest of Wordsworth's poems to be published in his lifetime (9,068 lines in nine books), and it is the centerpiece of the great epic that he envisioned. It is a 'dramatic poem', which records the conversation and debate among four characters—a Poet, Wanderer, Solitary, and Pastor—over a period of five days. Wordsworth first developed the plan for The Excursion with his friend Samuel Taylor Coleridge in 1797–1798, the same period during which they were collaborating on the Lyrical Ballads and in which Wordsworth was beginning the autobiographical poem posthumously published as The Prelude. As Wordsworth conceived it, The Excursion would be the second of three long poems in a comprehensive project to be called The Recluse, Wordsworth's mature philosophical consideration of "Man, Nature, and Human Life" (39). Of the three poems projected, Wordsworth completed only The Excursion [Ronald Schroeder, ‘The Excursion’, Textual Cultures 4:1 (2009), 151].

So, at the moment, I'm only in a position to make a few initial sallies into this huge poem. I'll be back, though.

The initial thing I'd record is how much more finely crafted the blank verse of the poem struck me on this latter re-read: insofar as Wordsworth is 'attacking' the notion of the small-scale picturesque and harmonious work, he is doing so from within, as it were. Here's a little scene of pleasant company by the lakeside from Book 9:


A gipsy-fire we kindled on the shore
Of the fair Isle with birch-trees fringed—and there,
Merrily seated in a ring, partook
A choice repast—served by our young companions
With rival earnestness and kindred glee.
Launched from our hands the smooth stone skimmed the lake. [Excursion 9:527-32]

I love the way that last line mimics its subject, swapping about the stress of its opening iamb into a trochaic launching pad, like the stone itself being thrown (running on excurrently into the remainder of the line), and then bouncing once, twice, thrice with the alliterative spondees of 'smooth stone skimmed', the repeated touches of sibilance onomatopoeiacally capturing the glancing impact with the water. Very nicely done. Or at the other end of the epic: this account of the origins of the Wanderer:


Among the hills of Athol he was born;
Where, on a small hereditary farm,
An unproductive slip of rugged ground,
His Parents, with their numerous offspring, dwelt;
A virtuous household, though exceeding poor!
Pure livers were they all, austere and grave,
And fearing God; the very children taught
Stern self-respect, a reverence for God's word,
And an habitual piety, maintained
With strictness scarcely known on English ground.

From his sixth year, the Boy of whom I speak,
In summer, tended cattle on the hills;
But, through the inclement and the perilous days
Of long-continuing winter, he repaired,
Equipped with satchel, to a school, that stood
Sole building on a mountain's dreary edge,
Remote from view of city spire, or sound
Of minster clock! From that bleak tenement
He, many an evening, to his distant home
In solitude returning, saw the hills
Grow larger in the darkness; all alone
Beheld the stars come out above his head,
And travelled through the wood, with no one near
To whom he might confess the things he saw.

So the foundations of his mind were laid.
In such communion, not from terror free,
While yet a child, and long before his time,
Had he perceived the presence and the power
Of greatness; and deep feelings had impressed
So vividly great objects that they lay
Upon his mind like substances, whose presence
Perplexed the bodily sense. [Excursion 1: 108-31]

That's a long chunk, but what leaps out at me is the verse-paragraph from the middle, lines 118-31:


From his sixth year, the Boy of whom I speak,
In summer, tended cattle on the hills;
But, through the inclement and the perilous days
Of long-continuing winter, he repaired,
Equipped with satchel, to a school, that stood   [5]
Sole building on a mountain's dreary edge,
Remote from view of city spire, or sound
Of minster clock! From that bleak tenement
He, many an evening, to his distant home
In solitude returning, saw the hills                  [10]
Grow larger in the darkness; all alone
Beheld the stars come out above his head,
And travelled through the wood, with no one near
To whom he might confess the things he saw.

Isolate that passage, and we have a rather beautiful sonnet to youth, where the blank verse flirts delicately with rhyme ('repaired'/'head', 'home'/'alone', even 'hills'/'hills'). The octave, from the first line up to 'Of minster clock ...', moves us through the more crowded scene of cow-herds and schoolfellows via polysyllabic words: inclement and perilous, long-continuing winter and so on. Indeed, the crowding even squeezes the prosody: I suppose we're invited to read the line But, through the inclement and the perilous days as But, through th'inclement and th'perilous days (horrid, that), but as it is printed, and if we choose to speak it that way, it actually runs twelve-syllables into the space allotted to ten.  Then we get to the sestet (from 'He, many an evening ...' through to '... the things he saw'), which effects a turn towards the isolating grandeur of Sublime nature in verse comprised, from the mid-point of line 10 onwards, wholly of disyllables and monosyllables, and predominantly the latter strung starkly together: he saw 'the stars come out above his head ... through the wood with no one near/To whom he might confess the things he saw.' Only the quasi-religious 'confess', there, disturbs the clear succession of one-stress words. This adds very effectively to the way this pseudo-sonnet, embedded in the larger poetic fabric, works towards the individualised loveliness of its encounter with the chaste stars.

There's something else in this 'sonnet', I think: something Wordsworth believed exemplary of the poet, but which will probably strike us as rather odd. It's one of the things what he says in the Preface to Lyrical Ballads, that the true poet delights in contemplating 'volitions and passions as manifested in the goings-on of the Universe, is 'habitually impelled to create them where he does not find them', and above all:


to these qualities he has added a disposition to be affected more than other men by absent things as if they were present.

Absence is much more what The Excursion is about than I remember. Onwards—excurrently.
Posted by Adam Roberts at 03:20