Wordsworth's 'Strange fits of passion I have known' (1798) 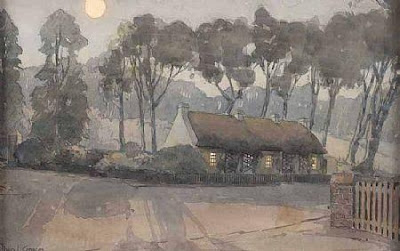 So, let me ask you a question about Wordsworth's 'Strange fits of passion I have known', one of the most famous of the Lyrical Ballad poems (written in 1798, it first appeared in the 1800 second edition of that famous collection). What kind of moon do you picture, hanging over the cottage?


Strange fits of passion I have known,
And I will dare to tell,
But in the lover's ear alone,
What once to me befel.

When she I lov'd, was strong and gay
And like a rose in June,
I to her cottage bent my way,
Beneath the evening moon.

Upon the moon I fix'd my eye,
All over the wide lea;
My horse trudg'd on, and we drew nigh
Those paths so dear to me.

And now we reach'd the orchard plot,
And, as we climb'd the hill,
Towards the roof of Lucy's cot
The moon descended still.

In one of those sweet dreams I slept,
Kind Nature's gentlest boon!
And, all the while, my eyes I kept
On the descending moon.

My horse mov'd on; hoof after hoof
He rais'd and never stopp'd:
When down behind the cottage roof
At once the planet dropp'd.

What fond and wayward thoughts will slide
Into a Lover's head—
"O mercy!" to myself I cried,
"If Lucy should be dead!"

I think I'd always assumed this was a full moon, perhaps because the scene described seems so fully and visually described, which is to say: there seems to be so much light in this nighttime scene. But reading it again, the imagery strikes me as a procession of sickles: the lover's ear; a rose-thorn; hoof after hoof (presumably imprinting crescent patterns onto the turf); words like 'bent' ('I to her cottage bent my way') and the overall upward-arc of the speaker meeting the downward-arc of the moon until it is eclipsed by the cottage itself. I even find myself wondering if the three crescent-letters 'u' and 'c' and 'y' that make up Lucy's name feed into this. Certainly a sickle-moon, coming down like death's scythe onto Lucy's cottage, makes more symbolic sense of that famously startling last line.

It's all symbolism, of course. The poem is always aware that the 'descent' of the moon is only an optical illusion, and that therefore the 'strange fit' with which the poem ends—'O mercy! If Lucy should be dead!'—has everything to do with the narrator's state of mind and nothing with the external world. The seeming simplicity of the poem's diction and form throws into sharper relief than might otherwise be the case the Empsonian ambiguity of this 'fit'. Is it a fit in the sense that an epileptic has a fit, which is to say a sudden, unexpected aberration? Or is it, rather, something fitting, something that suddenly reveals itself to be proper, the right thing, the desired thing? In either case it deserves the modifier strange. A lot depends on the if in the final line. Its an unstressed little syllable, and its position sandwiched between two syllables not only stressed but prosodically long (cried, a dipthong, and Lūcy) tends to deemphasize it further. Without it, the statement looks rather more like a sudden conclusion that Lucy must die. Even with it, the 'if' modifies in a strange, and strangely unemphatic, way. Maybe it would be better if Lucy were to die? What kind of lover would ever wish such a fate on his beloved?

Love is a complicated emotion. That sentence looks more than a little fatuous, put like that, but it's true. It might be possible to wish an inamorata dead for reasons other than hatred, or anger, or psychopathy. It might, for instance, to feel that strange passionate tangle of desires after the manner of Scobie in Greene's The Heart of the Matter. I appreciate, of course, that most people don't read the poem this way: it is conventionally taken that the strange fit of passion is a fear, not a desire, a sudden anxiety that one's lover might die, or perhaps an existentially vertiginous apprehension of mortality as such. But the thing about desires and wishes is intimate, as Shakespeare's King Henry knew: a person's wish can be father to that person's thought.

The poem is a simple anecdote, 'what once to me befel', and the pun on befel is almost too much. What befalls the speaker is the moon, seemingly be-falling: 'the moon descended'; 'the descending moon'; 'the planet dropp'd'. Thoughts 'slide' into the speaker's head. Everything seems to be falling and slipping and dropping, which is also why the moon is the appropriate poetic symbol: the mutability of all.

But, see, this makes me wonder if this is a poem about a different kind of falling, that thing we call 'falling in love'. It can be discombobulating, that feeling. Strange. Odi et amo: all that. Unthinking people sometimes assert that 'love' and 'hate' are opposites. They're not, of course; a better opposition would be between 'love' on the one hand and indifference on the other. Love and hate, both modes of emotional intensity, have a worrying amount in common. Nevertheless it would be insane to say they are synonyms. Love puts the other above you, even if it blots out everyone in the world who is not you and I. Hate puts the other below you. It is a false idiom to say we fall in love, although falling is a very expressive and exact way of talking about the way hatred possesses us. We don't fall in love; we rise into it. But then: that's exactly what the speaker, here, does. He rises.
Posted by Adam Roberts at 09:30