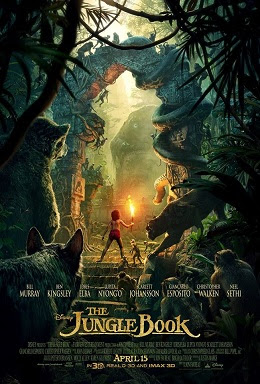 I've heard this described as a live-action version of the classic 1967 Jungle Book, but it's really not. There's one live-action actor: young Neel Sethi as Mowgli (and a very natural and charming performance he gives too), but the rest of the cast are not only animated, but animated to a degree of technical polish and panache that approaches the breathtaking. Nothing here looks CGI, although everything here is CGI. And the storytelling is good, too; well-paced and well-rounded. I watched it with my 8-year-old and found myself thinking what a refreshing change from endless MCU and DC cinematic blather it was.

This movie exists in a fascinating relationship with its source text: the 1967-Disney, I mean, not Kipling (though there's some Kipling in here too). It clearly expects its audience to know that movie—a reasonable expectation—and plays off that knowledge in a raft of clever ways, from plot-tweaks and character upgrades, to nifty weaving of themes from the original songs into the orchestral soundtrack. I thoroughly enjoyed it. Idris Elba's performance as Shere Khan is a particular stand-out: dripping with menace and genuinely intimidating.

There were a couple of flaws in the mix, I thought. On two occasions characters actually sing truncated versions of the 1967 songs, which is a bit neither-one-thing-nor-the-other: either the film should give us the full musical glory, or else stay true to its chosen new aesthetic. The comedy was only patchily effective, too. Some of the minor characters had laugh-aloud moments, but Baloo is a problem. His voice is pleasantly rendered by the ever amiable Bill Murray, but his photorealist ursine exterior is so actually and alarmingly bear-like that it undercuts the dialogue, making it more eek! than ho-ho. And this leads to my main complaint.

This version of The Jungle Book has two big climactic scenes, one with Mowgli and King Louie in the ruined temple, and the second final showdown with Shere Khan in the burning forest. In the 1967 film these don't interfere with one another, since the first is played for laughs and the second for its dramatic excitement. But in this remake, King Louie is reimagined as a house-sized Gigantopithecus. Voiced with sinister relish by Christopher Walken in mafia don stylee, Louie squats huge in the shadows of his temple, surrounded by thousands of chattering acolytes, occasionally leaning out to let the light shine upon his huge bald cranium. The visual quotation of Kurtz in Apocalypse Now must surely be intentional. Which is fine, and in places both properly creepy and (when the monstrous Louie pursues Mowgli through the temple) pretty scary too. But it utterly deflates those moments when Favreau wants to gesture towards the original's humour. The result is a big, dramatic smash-em-up denouement, which is then followed in short order by another big, dramatic smash-em-up denouement. This second climax treads on the first's toes, with the consequence that the movie feels too long, the final confrontation between the tiger and the man-cub too drawn out and the whole thing overbalanced and over-topply. A shame, because up to that point it was doing a really good job.

The film's repeated quotation of Kipling's four line poem from The Second Jungle Book (1895), 'The Law of the Jungle', is suitably stirring, but a long way from the artless charm and bright-colour lightness of the 1967 movie: