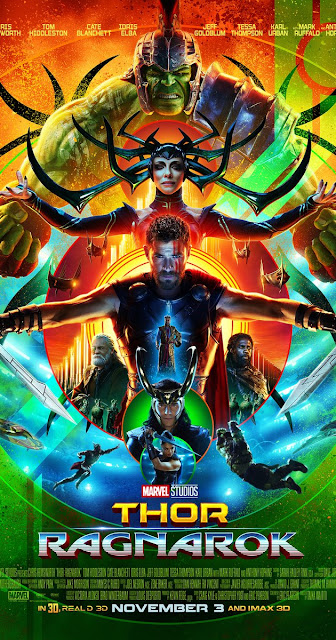 I enjoyed this very much, and so did my ten-year-old son. You've already encountered a bunch of reactions to and reviews of the movie, I know, and I don't presume to claim there's anything very much I can add to them. The design is superb. There's a wonderful, garish, proggy vibe throughout. The whole is rendered well-paced and exciting by embracing (rather than despite of) its many sillinesses. It's funny. I laughed aloud, many times. I read an interview with Waititi in which he said the initial cut of the film, omitting much of the farce, was under ninety minutes, but he decided it didn't work and reinserted all the funny stuff, which gives us the two-and-a-half-hour action-comedy on general release now. And it is funny. And I like funny.

It's a question of balance, though, isn't it? Because this is a movie that almost manages to say something quite interesting, in a kinetic and accessible manner, along the lines of there being no document of civilization which is not at the same time a document of barbarism. Almost. Cate Blanchett's Hela knocking away the outer layers of fresco to reveal the violent and warlike images beneath. But punches are pulled. As, for instance, when Anthony Hopkins's Odin walks to the edge of a Norwegian cliff and dissolves into a mystic cloud of petals, instead of (as it might be) expiring in a hospital bed in this universe's equivalent of Spandau Prison. That kind of thing.

Hela, gesturing at Asgard, and asking her brother ‘where did you think all this gold came from?’ ought to be the heart of the movie. But it's drowned out by the sheer insistence of the film's hearty guffaw, the politically sedative implication of which is that nothing under any of the nine suns is serious or urgent. I feel like a killjoy saying so, but it does seem to me an opportunity, of sorts, missed.
Posted by Adam Roberts at 04:05