"I Got Ninety-Nine Novels/But a Burge Ain't One" 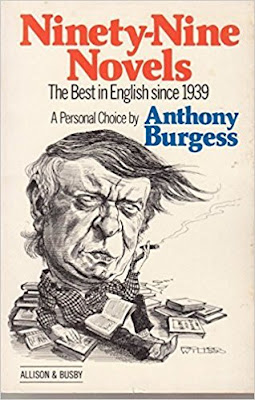 Ninety-Nine Novels: the Best in English since 1939 (1984) was pulled together, Burgess claimed, in a fortnight. When he wrote his (pretty good) entry on ‘The Novel’ for the 15th ed. of the Encyclopedia Britannica he included discussion of himself amongst the various other notable 20th-century writers. Not here. ‘I have, with right modesty,’ he says in his preface, ‘excluded myself from my list.’ If you like AB novels I feel bad for you son. We get ninety-nine novels, but ... look. Don't make me flog my jokes to death. Alright?

Sometimes the sheer speed of composition does show through. The account of the earlier novels reuses (‘plagiarises’ would be harsh) material from Burgess's prior The Novel Today (1963). There is a degree of repetition from entry to entry, especially when an unusual word takes Burgess's fancy. ‘The big theme of Lucky Jim (1957),’ he tells us, ‘is that of hypergamy—bedding of a woman of a social class superior to one's own.’ The very next entry is in John Braine's Room at the Top (1957), ‘a study in provincial hypergamy—or bedding of a woman from a class superior to one's own.’ Signs of haste are present, too, in the overall conception. In the preface Burge says that, although he is ‘an avid reader of Irving Wallace, Arthur Hailey, Frederick Forsyth, Ken Follet and other practitioners of well-wrought sensational fiction’, such novels 'never stood a chance of being placed on my list’ [14]. That the list goes on to include such well-wrought examples of commercial fiction as Fleming's Goldfinger and Len Deighton Bomber is to its overall credit, I think, despite the inconsistency.

There are a few oddities (who in their right mind, really, would say that Updike's best novel is The Coup?) and if the choices grow less enduring as we approach the date of composition, that's probably not Burgess's fault: everybody in the 1980s thought Robertson Davies was a contemporary great, though nobody reads him now. Mind you, even back then it was clear that a lifetime is too short (and eternity barely long enough) to read Mailer's interminable Ancient Evenings. In the LRB Ian Hamilton was witty if cruel on the subject of Burgess's sometimes idiosyncratic choices:


Burgess’s book—as all the world must know—is a riposte to the Book Marketing Council’s ‘Best Novels of Our Time’ hype, and many of its quirks may have to do with his displeasure at having been, shall we say, disincluded from that list of the elect. Wherever possible, he sees to it that their taste is rebuked by his. He starts off by lopping two titles from the BMC list on the grounds that neither of them is what he would call a novel. Animal Farm, he rumbles, is a ‘fable’ and ‘hence cannot be considered for inclusion here’ and Lord of the Flies—although it ‘probably’ earned Golding ‘his Nobel wreath’—‘is a little too systematised and allegorical to be regarded as a true novel’. Bad luck, chaps. Would Burgess have been quite so vehement in more relaxed conditions? Would he, for instance, have included Henry Green’s Party Going in his 99 if this ‘carefully wrought poem’ had been favoured by the BMC? Probably not. Thus, Kingsley Amis’s Anti-Death League more or less has to be preferred to Take a Girl like You, Iris Murdoch’s The Bell to her The Sea, the Sea, Humboldt’s Gift to Herzog, Pale Fire to Lolita, and so on. With J. D. Salinger, he capitulates and picks The Catcher in the Rye, but then to have swerved here might have meant acknowledging the Glass tales as ‘true novellas’, or as, bits of a true-novel-in-progress.

There may be something in this (‘Where will this end? And when, oh when will somebody pick Earthly Powers!’), although at the same time we can say that The Sea, the Sea, for all that it won the Booker, is pretty turgid and dull compared to the lively symbolism of The Bell; and many people would agree with the proposition that Pale Fire is superior to Lolita.

Still a Burge ought to be one the 99, especially since several of these texts have been rather promoted above their abilities. Of Lady Snow's An Error of Judgement (1962) a novel that has I fear fallen right off the radar, Burgess says ‘alas, her style is undistinguished, even slipshod, but human concern shines through’ [84]. On the other hand, there's one way in which Burgess's list, whatever its provenance, was remarkably prescient. It's true that, with the single exception of Roberts's Pavane, he does not include any what-we-might-call ‘genre’ SF or Fantasy; yet he still grasps on some level that the SFnal and the Fantastic is the direction in which the novel is travelling. A good chunk of his choices are straight SFF—Aldous Huxley After Many a Summer (1939); James Joyce, Finnegans Wake (1939); Rex Warner, The Aerodrome (1943); Mervyn Peake, Titus Groan (1946); Nevil Shute, No Highway (1948; the protagonist's daughter has ESP powers don't forget; and in his entry Burgess speaks very highly of On The Beach); George Orwell, 1984 (1949); T. H. White, The Once and Future King (1958); L. P. Hartley, Facial Justice (1960); Angus Wilson, The Old Men at the Zoo (1961); Aldous Huxley, Island (1962); John Barth, Giles Goat-Boy (1966); R. K. Narayan, The Vendor of Sweets (1967); Mordecai Richler, Cocksure (1968); Roberts's aforementioned Pavane (1968); Michael Frayn, Sweet Dreams (1973); Thomas Pynchon, Gravity's Rainbow (1973); J. G. Ballard, The Unlimited Dream Company (1979); Russell Hoban, Riddley Walker (1980); Alasdair Gray's tremendous Lanark (1981)—and discussion includes quite a lot more. From Burgess's other picks I stop short of bracketing Ralph Ellison's brilliant Invisible Man (1952) as SFF, despite its strongly magic realist flavour; Doris Lessing seems to me a fundamentally SFnal writer, and not just because of the Shikasta books, though the utopian strain in The Golden Notebook (1962) is probably too thin to count in this context. We might call Kingsley Amis's The Anti-Death League (1966) a sort of theological Fantasy novel I suppose. Nye's Falstaff (1976) is Fantasy of a Rabelaisian sort. It seems perverse to choose, given the scope and range of Brian Aldiss's SFnal ouevre, his non-genre novel Life in the West (1980) for inclusion here (though Burgess does concede that Aldiss is ‘highly regarded as a practitioner of science fiction’).

It seems to me that what this list is missing is a sense that the logic of The Novel shifted profoundly in the 20th Century from being focused on individual writers to being focused of distinct genres. Or more precisely, 99 Novels is an exercise in genre, in the same way that the Booker is a genre prize. The genre is 'literary fiction', and Burgess's taste in that skews quite heavily towards fantastika without quite accepting that, really, he'd be happier if he moved right on over and included Tolkien, Le Guin, Phil Dick, Moorcock and so on. But there you go.