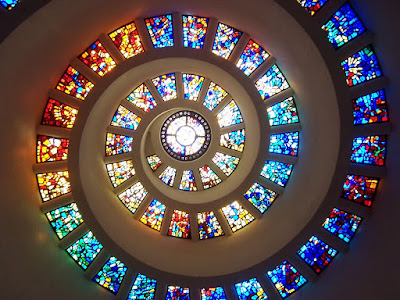 I've been reading Statius's Thebiad, for non-Shelley-related reasons, when I came across something that put me in mind of the wonderful image from the last bit of ‘Adonaïs’:


The One remains, the many change and pass;
Heaven’s light forever shines, Earth’s shadows fly;
Life, like a dome of many-coloured glass,
Stains the white radiance of Eternity,
Until Death tramples it to fragments.—Die,
If thou wouldst be with that which thou dost seek! [‘Adonaïs’, 460-65]

The Thebiad is an epic retelling of the story of the Seven Against Thebes, and in Book 1, as per epic convention, Jove commands the gods to assemble so as to consider the sorry mess Oedipus's descendents are making of things. This is where they gather:


Soon enough a multitude of wandering
demigods and cloud-kin river deities
(timidly restraining their usual roars) and wind-spirits
crowd under the golden ceilings; the mingling of gods made that
majestic dome tremble, its heights glowing sky-bluer,
and its doorways florescing with arcane light.

There's no glass here, but there is a divine dome that shines with many colours (gold, blue, and whatever colour ‘arcane light’ is) mediating, through semidivine multiplicity, the divine oneness of Jove. We know Shelley read Statius: he mentions him in the Defence of Poetry. Was this mixtum convexum, this many-coloured dome, in his mind as he wrote his great Keatsian elegy?
Posted by Adam Roberts at 02:59