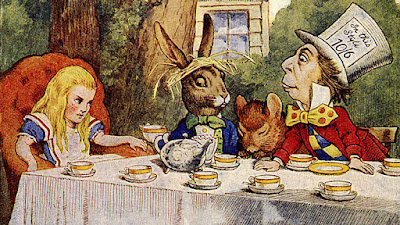 Alice in Wonderland (1865) is a masterpiece of literary nonsense, that mode in which ‘the formal elements of language and logic that facilitate meaning, such as semantics, syntax, phonetics, context, representation and formal diction, are balanced by elements that negate meaning’ [Wim Tigges, An Anatomy of Literary Nonsense (Rodopi 1988), 47]. One way to think about a work like Alice is to say: it inhabits the form of the riddle, or the joke, but without providing the solution or punchline to make (comic) sense of the strange juxtapositions or bizarre worldbuilding of its riddle or joke. Carroll structures his story like this, orchestrates its various episodes and even works his characterisation this way—that is, as a riddle without an answer.

He even adds actual riddles-without-answers into the fabric of the text. The most celebrated of these is to be found in the ‘A Mad Tea Party’ chapter when the Hatter asks Alice: ‘why is a raven like a writing desk?’ When Alice gives up and presses him for an answer the Hatter says: ‘I haven't the slightest idea!’ This is funny and frustrating (it's funny because it's frustrating, which is really the whole logic of the book) but frustration has a habit of persisting. In the aftermath of the book's initial success, many readers, child and adult alike, wrote to Carroll pestering him for the answer. In his preface to the 1896 edition of Alice's Adventures in Wonderland, Carroll wrote:


Enquiries have been so often addressed to me, as to whether any answer to the Hatter's riddle can be imagined, that I may as well put on record here what seems to me to be a fairly appropriate answer, ‘because it can produce a few notes, though they are very flat; and it is nevar put with the wrong end in front!’ This, however, is merely an afterthought; the riddle as originally invented had no answer at all.

To answer the riddle is, in a sense, to miss the point; and the point is that the riddle has no answer.

This, though, really isn't a hard riddle. Or perhaps it would be truer to say: it only seems hard to those who insist on trying to locate its answer in the manifest content of its text. The Alice books are dreams, and their logic is a dream logic—which is to say, they are a deliberately fashioned waking approximation or pastiche of such logic. In The Interpretation of Dreams (1899) Freud argues that dream-content is always a (condensed, displaced) re-presentation of notions and affects originally repressed out of the conscious mind into the Id, things that either made us anxious and scared, or else manifested desires we felt to be taboo, that made us guilty. But the repressed, Freud insists, always returns, in twisted or ludic forms, as neurotic symptoms, or slips-of-the-tongue, or dreams. Especially dreams: Freud described them as ‘the royal road to the unconscious’. The trick to understanding dreams, according to Freud, lies in distinguishing the garbled-seeming manifest content of the dream from its more comprehensible latent content, and also in grasping that the ‘meaning’ of this latter is affective rather than rational. That is: it has to do with fears and desires that have been repressed and which are returning.

So what, in a dream context, might be signified by the juxtaposition of a raven and writing desk? The ‘dreamer’ here is Charles Dodgson: that shy stammerer, a man whose waking life was dominated by rituals of polite respectability, High Church Anglican orthodoxy, codes of social courtesy and exactness. A stickler for proper forms, a gentleman-don, a retiring individual who invested considerable energy in the avoidance of scandal and impropriety. The one arena in which Carroll permitted himself to unbutton, emotionally, was his intense affective attachment to pre-pubescent girls. He made friends with hundreds of these over the course of his life, played with them, took them on trips, wrote riddling and comic letters to them, photographed them and so on. In every instance, and with an eye to the proper and respectable way to proceed, he acted under the metaphorical and sometimes the literal eye of the girls' mothers. So: he never approached a young girl on her own, but always through her family. Sometimes he photographed these girls naked, but he would always write to ask permission of the mothers first (sometimes this permission was declined, but, remarkably enough, sometimes it was granted). Even when his emotional attachment to particular girls was very strong, as it seems to have been with Alice Liddell and her sister Lorina, when Mrs Liddell expressed even modest disapprobation (in 1863) Carroll broke of all contact and never saw Alice or Ina again.

His hypercorrectness, we can intuit, was the manifestation of a prodigious anxiety that his attraction to pre-pubescent girls would be misconstrued—by society at large, but also, I think, in a more inward sense. That is to say: Carroll was on some level afraid that his own understanding of this attachment (desire he presumably rationalised to himself in terms of the pure and spiritual beauty of pre-sexual innocence) was liable to be misconstrued as per its true nature. We should tread carefully, I suppose. The proneness of moral panic to accrue around the topic of pedophilic sexual desire doesn't diminish the capacity for human wrong and suffering such desire entails. Carroll almost certainly never acted on his desires. Do we judge him for having those desires and repressing them? Hypercorrect stammering Dodsgon in his frock-coat and his pale-grey kid gloves (he had stained his hands purple from the chemicals he used developing his photographic plates and always wore the gloves) hovering around young girls—the point isn't whether we find this figure creepy, because of course we do. It's whether he found himself creepy. Many of us do.

What is a raven except a bird of ill omen, croaking itself hoarse on the battlements of Macbeth's castle, or spying out wickedness in the world as Odin's roving eye? What is a writing desk except paraphernalia by which text get itself manufactured, from notes and letters all the way up to books—to books, let's say, like Alice in Wonderland? And most importantly of all: why might we connect these two things, the publication—the in-plain-view display—of this one man's taboo love for this particular, named little girl, and the avian manifestation of things about to go horribly and publicly wrong? Linking inauspiciousness and the production of written text. The evidence that the sky-god has spied into your wickedness and will not be pleased? I mean, what do you think? If Carroll were your psychiatric patient, stretched on the couch in your consulting room, and told you about a weird dream he'd had that jumbled up ravens and writing-desks, how would you Joseph-bar-Jacob it?

Children loving play generally, and playing games in particular and games are the formal codification of desires that in large part would, without the structure of play, be much more disruptive (as the footballer kicks a ball into a net rather than decapitating his enemy, or as kiss-chase both purifies and, in a way, oxygenates nascent and perhaps taboo sexual desire). Nonsense is playful in this mode, but contra to the Wim Tigges definition I quoted at the start of this blog it is not really a semantic or syntactic game that is being played. The game is about desire and the obstacles to desire, and it always has been.