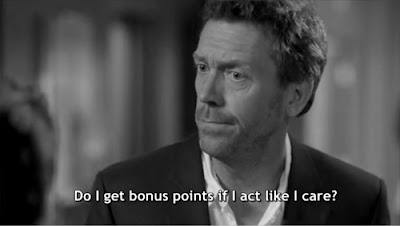 I really don’t care, do u


I caught an old episode of House M.D. the other day.

It was almost unwatchable.

Don't get me wrong: it was sharply written, dramatic, well-made—it was the episode where House ‘saves’ a dwarf's daughter from growing up as a dwarf herself by diagnosing a tumour on the girl's pituitary gland, spending a good deal of time making cruel fun of the mother's dwarfism into the bargain. Hugh Laurie was as watchable as ever (always nice to see old Soupy Twist turn his hand to drama). And whilst I was never a super-fan of the show when it was originally broadcast I used to watch it from time to time, and generally I enjoyed it. There were a couple of years when it was pretty much unavoidable, after all: ‘the most-watched television program in the world in 2008’ according to Wikipedia. But to watch it a decade later, after all that has happened in the world, is to encounter a completely different text.

The conceit of the show is that Dr House, the title character, is a hospital doctor diagnostic genius with an abrasive personality. Like a kind of medical Sherlock Holmes he solves intractable illnesses and cures his patients, whilst also insulting people, making cruelly funny comments and generally being an arsehole. We are ‘supposed’ to forgive him his manner, since his genius is of the troubled variety: a gammy leg means he walks with a stick and is in constant pain (he's constantly cadging, or actively stealing, opioids because of this, the lovable-irascible old drug addict!) We later discover, though I'm a little hazy on the details, that he's manic-depressive, has a troubled past, yaddayadda, so we give him a pass for his rudeness. After all: he's a genius! His brilliance saves lives!

Except we don't give him a pass for his rudeness. We relish it. It's why we watch the show. House is licensed, by the weirdly specific and bizarre format of the show in which he appears, to say all sorts of taboo and outrageous things, and we are licensed, vicariously, to enjoy that fact. And that has, I'd say, aged very badly. Because House's performance of obnoxiousness has, in a broader sense, become today's whole political climate. The character's ‘medical genius’, which notionally justifies his rudeness, is a pretext. We don't excuse his rudeness because he's a troubled genius; we tell ourselves that he's a troubled genius in order that we can enjoy his rudeness.

On the Right nowadays this is known as being ‘anti-politically-correct’, and it usually folds itself into a notionally exculpatory narrative. If we replace the phrase ‘political correctness’ with the word ‘courtesy’, or if we call anti-political-correctness bullying, it throws an uglifying kind of spotlight on what has become very widespread behaviour. So instead the anti-PC crowd say: nobody wants to be rude for rudeness sake, but we have to be strong, we have to tell hard truths, the cosmos doesn't provide safe-spaces, snowflake youngsters today need to toughen up. And so on. None of it is true, but truth isn't the point. The point is the joy of shuffling off the discontents of repressing your own objectionable thoughts and feelings, of venting what you really feel; and causing pain to others (owning the libs, as the phrase goes) is just the icing on the cake. Today's Dr House is Donald Trump, and his discourtesy, bullying and rudeness is justified not by any troubled genius backstory or any body-of-expertise on which lives depend, but by a genius for being discourteous, bullying and rude. The obnoxiousness is its own ground, and its own justification, and it frees his followers to indulge the intoxicating jouissance of doing likewise. It's fun to be the bully, in direct proportion to how un-fun it is to be bullied. House is President now, except instead of being the Sherlock Holmes of medical diagnosis, he is the Sherlock Holmes of the racist ressentiment of white voters. Hence this blog's title.

A similar discursive logic predominates on the Left, too. Here it's framed not as an attack on ‘political-correctness’ so much as an animadversion towards ‘tone policing’, an insistence that any attempt to centre discussion, and especially disagreement, on protocols of courtesy is actually a bad-faith attempt to shut down discussion and disagreement altogether. The logic is: oppressed groups are angry and are right to be angry; the articulation of their anger is righteous. You're speaking truth to power, punching up and so on. These are truths the world needs to hear. I tend to think that's right, actually; these are usually truths the world needs to hear. But I also tend to think that the apotheosis of anger into political discourse is counter-productive to the world hearing part of the equation. There is a left-wing jouissance, not exactly equivalent to the right-wing anti-PC Trumpian joussiance, and certainly not symmetrical in terms of today's balance of power (the hard right is on the ascendancy at the moment, after all), but a jouissance nonetheless that tends to corrode practical strategies of persuasion. People rarely change their minds because others are yelling at them, although people do something change their minds. If we're interested in this latter as a practical political goal it's going to be worth working practically towards common ground. There's little of that going on right now, though. Alan Jacobs argues that it is vindictiveness that is ‘the great moral crisis of our time’ and I wonder if he isn't right: ‘social media serve as crack for moralists: there’s no high like the high you get from punishing malefactors. But like every addiction this one suffers from the inexorable law of diminishing returns.’ Making other people miserable also tends to make you miserable, with the added danger that this very misery is liable to fuel further anger at the world. This is at the root of Nietzsche's diagnosis of ressentiment as a psychopathology. It gives me no personal satisfaction to believe, as I do, that Donald Trump, away from the ego-boost of addressing his rallies of adoring fans, is often miserable. I'm sure he is. But I also suspect that his own misery ‘reads’ to him as anger (depression often works that way too) and that he has habituated himself over many decades into directing that anger at others. It's a very bad strategy for living. We ought not to follow his lead in this.

Conceivably we justify our unpleasantness to others in terms of our own misery. Scenes of Hugh Laurie's House, sitting at home solus drinking whisky, popping pills and scowling at the miserable loneliness he inhabits, work in the show as a kind of justification for his horribleness, somewhat akin the medical principle of inoculation. And the success of House as a show grew out of a time when this kind of obnoxiousness did not define mainstream public discourse in the way it now does. I suppose it seemed rock-and-roll back then; it had the frisson of transgression. There's nothing transgressive about it now, it's solidly mainstream. It's sheer old white guy braying nastiness. In fact being miserable yourself is no justification for making other people miserable. For these reasons I honestly did not enjoy watching this particular House rerun, and honestly don't think I'll be catching any more.
Posted by Adam Roberts at 02:20