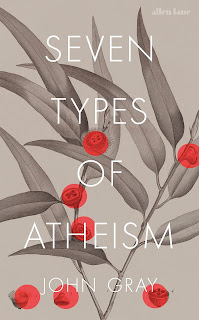 I've been reading Gray's recent book on atheism. I'm not sure why I don't like Gray more; part of me thinks I ought to. He's smart, winningly pessimistic, wide-ranging and his interests overlap with mine to a large extent. Something's missing, there, for me; though I'm not sure what it is.

Anyway, near the beginning of this Empsonian volume Gray says something that intrigued me. His line is that ‘atheism’ as a term ‘does not amount to very much. It is simply the absence of the idea of a creator-god.’


There is precedent for thinking of atheism in these terms. In the ancient European world atheism meant a refusal to participate in traditional practices honouring the gods of the polytheistic pantheon. Christians were described as “atheists” (in Greek, atheos meaning “without gods”) because they worshipped only one god. Then as now, atheism and monotheism were sides of the same coin. [Gray, Seven Types of Atheism, 2]

I'd not heard this, and it intrigued me. So I looked into it. So far as I can see it's not true: nobody in the ancient world used the word ἄθεος to describe people who worshipped only one god. But I don't suppose Gray simply made the fact up; I daresay he found it somewhere. I'm interested to know where. [Update: in the comments below, my friend Alan Jacobs shows that Gray didn't just make it up, and provides the sources after which I ask]

Liddell and Scott define ἄθεος as meaning ‘without God, denying the gods, esp. those recognized by the state’. They specify the last bit because their first reference is to Plato's Apology 26c, where Socrates asks Meletus:


I am unable to understand whether you say that I teach that there are some gods, and myself then believe that there are some gods, and am not altogether godless and am not a wrongdoer in that way, that these, however, are not the gods whom the state believes in, but others, and this is what you accuse me for, that I believe in others; or you say that I do not myself believe in gods at all and that I teach this unbelief to other people.

Meletus says ‘that is what I say, that you do not believe in gods at all’ and Socrates replies ‘you amaze me, Meletus!’

L&S also cite Cicero's judgment of Diagoras, known as ‘Diagoras the Atheist’, from De Natura Deorum, iii 37: ‘a friend pointed out an expensive display of votive gifts to Diagoras and said, “You think the gods have no care for man? Why, you can see from all these votive pictures here how many people have escaped the fury of storms at sea by praying to the gods who have brought them safe to harbor.” To which Diagoras replied, “Yes, indeed, but where are the pictures of all those who suffered shipwreck and perished in the waves?”’ Atheus ille qui dicitur says Cicero, which seems fair enough. Then again, Diagoras was not a popular fellow in his native Greece. He was, notes J M Robertson, ‘charged with divulging the Eleusinian and other mysteries, and with making firewood of an image of Herakles, telling the god thus to perform his thirteenth labour by cooking turnips, became thenceforth one of the proverbial atheists of the ancient world, and a reward of a silver talent was offered for killing him, and of two talents for his capture alive; despite which he seems to have escaped.’

L&S go on to cite examples of the word as meaning ‘godless, ungodly’ and ‘abandoned of the gods’. There's a poem by Bacchylides (his eleventh ode) where Hera drives the daughters of Proteus mad by forcing them to disbelieve in the gods, a strange sort of punishment, one might think, for a god to inflict on a mortal: ‘while still virgins, they entered the sanctuary of the purple-belted goddess, and said that their father far surpassed in wealth the golden-haired consort of holy, widely powerful Zeus. In anger at them, she put a twisted thought into their minds, and they fled to the wooded mountain with terrible screams, leaving behind the city of Tiryns and its god-built streets’. At the end of the ode, Hera reverses her judgment and cures the girls of their μανιᾶ ἀθέων, their ‘atheist mania’ or ‘atheist madness’, and in return they (wisely, I'd say) ‘built her a sanctuary and an altar right away, and stained it with the blood of sheep, and set up choruses of women’ [this is Diane Arnson Svarlien's 1991 translation]. L&S also note that the word might be used adverbially ἄθεως, to mean ‘by the anger of heaven’ ‘in most unholy wise’. In all this there's a clear semantic field for the word: atheism is an ill-advised disbelief in the gods, perhaps a madness, certainly inauspicious and unholy.
Posted by Adam Roberts at 06:56