A Trove of Triffids 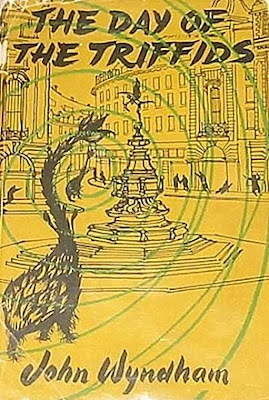 John Wyndham's 1951 novel The Day of the Triffids manages the impressive task of making vegetables scary. It requires a degree of contrivance, but Wyndham pulls it off. First he posits bioengineered carnivorous plants that can walk about on three stumpy legs and sting their prey with whip-like tentacles. Then he adds-in a second disaster: a spectacular meteor shower (which may actually be an orbiting weapons platform: it's never made clear) that blinds all who see it, leaving whole populations helpless before the perambulating plants. The result is one of the masterpieces of British ‘cosy catastophe’ science fiction. The original Michael Joseph cover by Welsh artist John Griffiths imagines the triffid as a sort of giraffe-shaped artichoke on tuberous legs. Since ‘gigantic artichokes’ rather undersells how tense and scary Wyndham's novel actually is, Griffiths has superimposed spiraling green lines to convey alarm. Still, his conception of triffid was iconic enough for it to be copied across to the 1961 Penguin first paperback edition with only minimal changes: 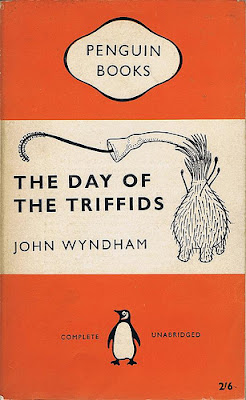 There's something about the neatness of Penguin's orange-and-white livery that adds menace to the clear-line drawing of the plant in the middle; an effect enhanced by the way the penguin logo itself appears to be giving us an alarmed side-eye at the proximity of the monster. The cover art for the first US edition (1951), by New York artist Whitney Bender, reworks the British cover by adding turmoil in the sky: 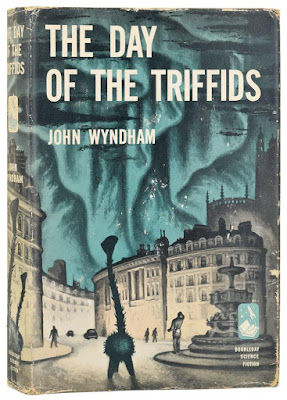 The splendour of the rendering of city and sky rather dwarfs the poor little triffid, who looks more like an overgrown lampost than a monster. Bender was in his day a respected painter for whom book illustration was a sideline, and there's something a little too stately about his terror-plants. By way of contrast this Earle Bergey cover for the ‘Popular Library’ paperback of 1959 is much more kinetic and vivid, even if it relies for its effect on the titillation of partially undressing the books' heroine: 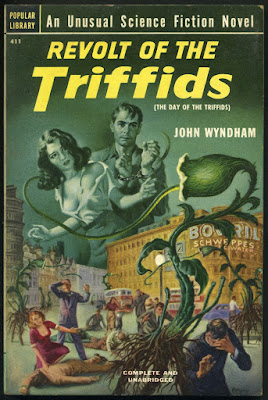 ‘Revolt ...’ was clearly considered a grabbier title than ‘Day ...’, although that shout line is a little strange. Hard to read it, now, without inserting a tentative pause between the first and second words. ‘An  ... unusual science fiction novel’. Still the triffid itself is painted with impressive force and dynamism. Then there's this 1972 cover (artist unknown) with a trio of bristling triffids, standing like backing singers. 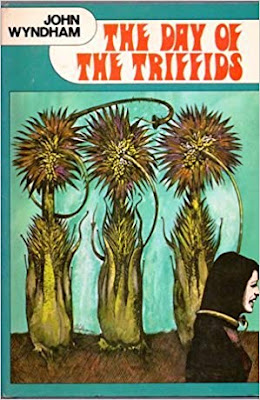 Gladys Knight and the Pippids.