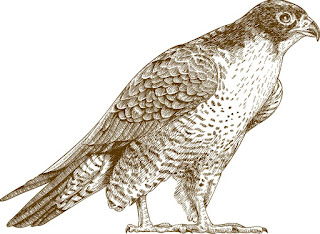 
The hawk comes down from the air.
Sharpening his eye upon
A wheeling horizon
Turning scrutiny to prayer.

He guessed the prey that cowers
Below, and learnt to keep
The distance which can strip
Earth to its black contours.

Then trod the air, content
With contemplation till
The truth of valley and hill
Should be self-evident.

The cowers/Below enjambment is a bit clumsy; and the third stanza has the feel of marking time that makes it seem more anticlimactic than it needs to after such a sweeping opening. But then the poem takes a turn for the twee:

I'll stop there, for a moment, to observe that I don't think there's a poet in the English tradition with the skill to prevent ‘or as the little lark’ coming off as soppy. Anyway.


Or as the little lark
Who veins the sky with song,
Asking from dawn to dark
No revenues of spring:

But with the night descends
Into his chosen tree,
And the famed singer ends
In anonymity.

So from a summer's height
I come into my peace;
The wings have earned their night
And the song may cease.

That ending, retrogressing from Hughes to Newman or indeed Newbolt, feels unearned. A shame, because it starts pretty well.

So: I took this poem, fed it into Google translate on an English-Dutch setting, then took the result and fed it back through the Dutch-English filter. What emerged is below. I prefer it to the original, I think.


The hawk comes down from the sky.
Grinding his eye
Wheeling a horizon
Test run prayer.

He recommended that to the cowering prey
Below, and learned to keep
The distances that strip
The earth for its black contours.

Then enter the air, the contents
With contemplation of
The truth of the valley and hill
Must of course be

Or  the Lark
Whose veins the sky singing,
Questions from dawn to sunset
No income of spring:

But with the night falls
In his chosen tree,
And the famous singer ends
In anonymity.

So from a summer height
I come into my peace;
The wings have earned their night
And the song may be present.

I'd say it needs a little extra tinkering to take out the residual rhymes, which are now just distracting now. But otherwise: better!
Posted by Adam Roberts at 02:37