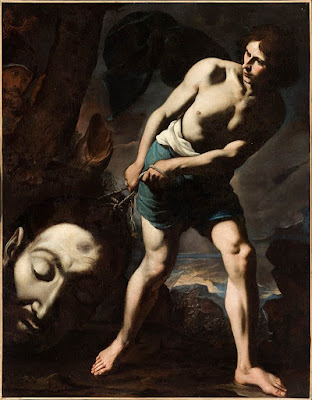 Kings erect gigantic statues of themselves, in order (you understand) to exaggerate their importance in the world. But Goliath living was as large as any sculptured dead pharaoh. He moved ponderously, it is true, but a blow from his right arm could smash houses and crumble boulders, and his feet were the size of boats, and his beard baobab-big. David trembled, naked and skinny as he was and armed only with a sling. ‘I curse you by your own gods,’ Goliath boomed, ‘for I am as large as they, and they do my bidding from sheer terror at my strength of arm.’ David’s ‘I will strike you down,’ came out in a piping voice. ‘I will give the dead bodies of the host of the Philistines this day to the birds of the air and to the wild beasts of the earth; that all the earth may know that there is a God in Israel, and that all this assembly may know that God saves not with sword and spear; for the battle is God's, and he will give you into our hand.’ Goliath laughed, and put his left foot forward to advance on his enemy, and David slung his stone, cracking the mighty bone jar of Goliath’s forehead. It took David half an hour to saw through the huge neck.

David was celebrated among the Israelites, as of course you would expect him to be. And afterwards, as you already know, he became king, and captured Jerusalem and established a mighty dynasty. You are aware of the story. But the end of David’s life was not as, perhaps, you have been told; for his heir Solomon, renowned for his splendour of the merely outward show of majesty, was not the true ruler. Power passed instead to a dwarf, a man named Yedidiah, who came to David in the king’s seventieth year and challenged him in his royal tent. David laughed, because the fellow’s head sat on so shrunken and deformed a body. ‘I am the monarch of a mighty nation,’ said David, still hale—for the blood of the patriarchs ran in his veins, and he might have lived as long as Methuselah. ‘You have the body of a crippled child.’ ‘I am the form fate takes in the working-out of its mortal dimension, King,’ replied the dwarf. ‘Jews think they cannot comprehend God, because He is so incomparably larger than any of us; but in truth we mistake the direction of our attention and should look not upward at the sky's enormousness but rather down into the dust.’ And Yedidah drew out a tube and put it to his mouth as if to play upon a musical pipe. Then he puffed, and a dart entered the innermost fold of David’s eye, where the tear-duct debouches, and disappeared. This dart snagged, as a poison-thorn, in the flesh and bone of the royal head and David fell back dead.

For many years Solomon enjoyed the outwards trappings of royalty and true power was in the hands of the dwarf, Yedidah. At Solomon’s death the tribes of Israel fell into disunity, and Yedidah moved to a fortress in the North of Judea not far from Hazor where, by means of certain magical amulets, he continued to exercise influence on human affairs for one hundred and eighty years. Finally, though, he died—or say rather, he was killed. For one night he lay awake, uneasy in his bed, and thought he saw a cat moving about the recesses of his chamber. So he lit a lamp and by its shivering yellow light he saw a man the size of a monkey, in raiment of gold and silver. A mere foot tall, slender as a child, but with the lines upon his face of the very old. The sight of this unnaturally tiny person shook fear out of the pulsing folds of Yedidah’s heart and he leapt from his bed yelling defiance. And though he was a dwarf his body was strong, and his eye unerring. ‘You are so skinny I shall cut you in half like a stalk of wheat,’ he boasted, but the tiny man said, in a voice like the whine of a mosquito, ‘I am already cut in half, like the moon at the middest of the month; but like the moon I shall grow whole again’ and tossed a powder into the air before Yedidah’s face. The dwarf could not help but inhale this poisoned dust and so he choked and died.

Must I draw the tale out? You see how it goes. I must? Very well. The little man had access to all of Yedidah’s magic charms and scrolls and was able to extend his life for many centuries and to exert power at a distance, walking through the dreams of kings and pharaohs. He compelled men and women to do his bidding, and went about the world sitting on the shoulders of his servant, draped in a cloth to disguise his identity. But in time, as of course he knew it would, he met his end. A woman came who was no taller than a hand's width, and skinny with it, like a child’s doll woven of a few wisps of straw. She was so tiny that you could only see her when she moved, and when the light was good. She slipped a single tiny seed-pearl into the tiny magician’s ear when he was sleeping, and the pearl took root and grew, and swelled, until the magician’s skull burst apart.

The woman’s name was Tzipor and she was as wily and cautious as her size had taught her. She lived in her fortress for many centuries until the humans who also occupied the castle, unaware of her presence, were defeated in one of the interminable wars humans like to fight. Thereafter the whole structure was torn down. Taking such magic artefacts as she could carry, and with her most potent charms written on tiny scraps of paper, Tzipor made her way to Jerusalem, since the great Temple had just been rebuilt there. She planned to live in the innermost chamber of this structure and from there to govern the whole world. But in the event she lived a mere seven days in that place, killed by a rival no larger than a tooth.

The years rolled around for the rest of humanity, each annual revolution as ponderous as Goliath’s footsteps, but for this new ruler of the world the seasons fluttered like a fly’s wing, refracting the light green, red and white with tremulous rapidity. It seemed to this secret Queen of the world only a short time, but in fact half a thousand years had passed when she was herself killed, as she knew she would be. Her assassin was the size of a grain of rice, and he dwelt in the feathers of a charmed owl that flew about the skies at night. He was himself killed by a smaller king, and this monarch was again killed. It is the rhythm of history and it runs according to the inevitable gradient of time. As, of course, you know.

The new queen was so tiny she could not be seen by the naked eye. But she commanded the ancient magic words, and propelled her thoughts into the minds of the temporal rulers of the lands of men, influencing them and shaping events. She wrapped herself around with charms to repel all attack and after a thousand years she began to believe that she had broken the cycle.

One morning, though, as she observed the dawn breaking over the sea outside her house, she was disabused. ‘What is your name?’ she asked her killer.

As the queen stared at the man he began to shine, and the shining became so intense that it consumed her, and her house, and her whole city, and so the new king of the world came to power, and his rule has, as I write these words, barely begun.