"Thetis of the Shining Breasts" 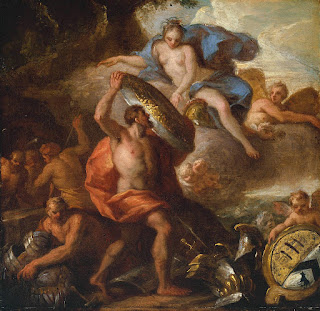 The image, there, is Sir James Thornhill's ‘Thetis Accepting the Shield of Achilles from Vulcan’ (1710), currently in the Tate.

You know the story already: Achilles, grief-stricken and furious at the death of his lover Patroclus, resolves to return to the war from which he had previously withdrawn. His divine mother Thetis visits the palace of Hephaestos, the smith of the gods, begging him to make her son a marvellous suit of armour and shield to protect him in battle. This the god does, because he owes Thetis a favour.


She [Charis] called to Hephaestus, the famed craftsman, and spake to him, saying: “Hephaestus, come forth hither; Thetis hath need of thee.” And the famous god of the two strong arms answered her: “Verily then a dread and honoured goddess is within my halls, even she that saved me when pain was come upon me after I had fallen afar through the will of my shameless mother, that was fain to hide me away by reason of my lameness. Then had I suffered woes in heart, had not Eurynome and Thetis received me into their bosom—Eurynome, daughter of backward-flowing Oceanus. With them then for nine years' space I forged much cunning handiwork, brooches, and spiral arm-bands, and rosettes and necklaces, within their hollow cave; and round about me flowed, murmuring with foam, the stream of Oceanus, a flood unspeakable. Neither did any other know thereof, either of gods or of mortal men, but Thetis knew and Eurynome, even they that saved me. And now is Thetis come to my house; wherefore it verily behoveth me to pay unto fair-tressed Thetis the full price for the saving of my life.” [Iliad 18:392-408; this is A.T. Murray's old Loeb translation from 1924]

Accounts differ as to why and by whom Hephaestus was thrown out of heaven; but Homer is clear that Thetis saved his life. In return the smith makes the armour, and not only forges the shield but decorates it with a wide range of gorgeously rendered pastoral and city scenes of peaceful Greek life.


She looked over his shoulder
For vines and olive trees,
Marble well-governed cities
And ships upon untamed seas,
But there on the shining metal
His hands had put instead
An artificial wilderness
And a sky like lead.

A plain without a feature, bare and brown,
No blade of grass, no sign of neighborhood,
Nothing to eat and nowhere to sit down,
Yet, congregated on its blankness, stood
An unintelligible multitude,
A million eyes, a million boots in line,
Without expression, waiting for a sign.

Out of the air a voice without a face
Proved by statistics that some cause was just
In tones as dry and level as the place:
No one was cheered and nothing was discussed;
Column by column in a cloud of dust
They marched away enduring a belief
Whose logic brought them, somewhere else, to grief.

She looked over his shoulder
For ritual pieties,
White flower-garlanded heifers,
Libation and sacrifice,
But there on the shining metal
Where the altar should have been,
She saw by his flickering forge-light
Quite another scene.

Barbed wire enclosed an arbitrary spot
Where bored officials lounged (one cracked a joke)
And sentries sweated for the day was hot:
A crowd of ordinary decent folk
Watched from without and neither moved nor spoke
As three pale figures were led forth and bound
To three posts driven upright in the ground.

The mass and majesty of this world, all
That carries weight and always weighs the same
Lay in the hands of others; they were small
And could not hope for help and no help came:
What their foes like to do was done, their shame
Was all the worst could wish; they lost their pride
And died as men before their bodies died.

She looked over his shoulder
For athletes at their games,
Men and women in a dance
Moving their sweet limbs
Quick, quick, to music,
But there on the shining shield
His hands had set no dancing-floor
But a weed-choked field.

A ragged urchin, aimless and alone,
Loitered about that vacancy; a bird
Flew up to safety from his well-aimed stone:
That girls are raped, that two boys knife a third,
Were axioms to him, who'd never heard
Of any world where promises were kept,
Or one could weep because another wept.

The thin-lipped armorer,
Hephaestos, hobbled away,
Thetis of the shining breasts
Cried out in dismay
At what the god had wrought
To please her son, the strong
Iron-hearted man-slaying Achilles
Who would not live long.

The short-line stanzas here (1, 4, 7) detail the kind of things portrayed upon the actual Homeric shield of Achilles; the longer-lined stanzas interspersed give us grim modern glosses.

But one thing puzzled me: why ‘Thetis of the shining breasts’? It looks like a maternal image, or perhaps even a sexual one. But here's the thing: although it is Homeric practice to add epic epithets to characters' names, neither he nor any other classical poet uses this particular epithet. In fact Homer uses only two epithets for Thetis: Θέτις Αργυροπεζα (as at Iliad 18: 369 and 381) which means ‘silver-footed Thetis’, and Θέτις Ἁλοσυδνης (eg Iliad 20:207) which means ‘brine-born Thetis.’ How do these breasts get into Auden's poem?

The answer is via a mistranslation (by no means the only one) in George Chapman's Elizabethan-Jacobean rendering of Homer. Here's how Chapman translates the lines quoted—in Murray's more literal version—at the head of this post:


She led her in, and in a chair of silver (being the fruit
Of Vulcan’s hand) she made her sit, a footstool of a suit
Apposing to her crystal feet; and call’d the God of fire,
For Thetis was arriv’d, she said, and entertain’d desire
Of some grace that his art might grant. “Thetis to me,” said he,
“Is mighty, and most reverend, as one that nourish’d me,
When grief consum’d me, being cast from heav’n by want of shame
In my proud mother, who, because she brought me forth so lame,
Would have me made away; and then, had I been much distress’d
Had Thetis and Eurynome in either’s silver breast
Not rescu’d me; Eurynome that to her father had
Reciprocal Oceanus. Nine years with them I made
A number of well-arted things, round bracelets, buttons brave,
Whistles, and carquenets. My forge stood in a hollow cave,
About which, murmuring with foam, th’ unmeasur’d ocean
Was ever beating; my abode known nor to God nor man,
But Thetis and Eurynome, and they would see me still,
They were my loving guardians.” [Chapman’s Iliad 18: 344-361]

‘I [had] been much distress’d/Had Thetis and Eurynome in either’s silver breast/Not rescu’d me’: the Greek is simpler: εἰ μή μ᾽Εὐρυνόμη τε Θέτις θ᾽ ὑπεδέξατο κόλπῳ: ‘had not Eurynome and Thetis received me into their bosoms.’ Why does Chapman add-in the silver? Because elsewhere in Homer Thetis's feet are described as silver. And because it makes the breasts shining, since these two beings are divine sea-nymphs. Which is to say: Hephaestus being received into their bosoms is Hephaestus falling an immense distance from heaven and hitting water rather than land, and so surviving. Their bosoms are silver-shining because that's how the sunlit sea is.

One thing this does, or so it seems to me, is draw out how dry Auden's horrible vision of contemporaneity is. It's all landscapes, wastelands, concrete and barbed wire. It is, we could say, a thirsty vision. The silver breasts of Thetis (the ‘she’ of the opening line, I suppose) represent not maternal nutrition nor even the individuated bliss of sexual connection, so much as the blue stretch of ocean, the diver leaping and sheathing himself in water: cool freedom and the escape of survival. At any rate, that (I think) is how Auden got ‘Thetis of the shining breasts’.
Posted by Adam Roberts at 03:20