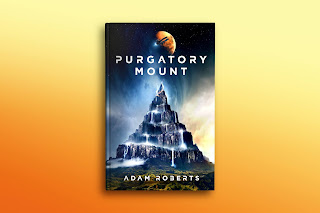 My friend Rich Puchalsky has written two twitter-threads on the Mount. The first records his reservations about the novel, which he thinks 'interesting' but not really successful; the second is about eagles. You should read them both.

I'm not going to reply to Rich's points here; an author bickering with a review is an unseemly sight, and anyway a reader is generally in a better place to judge the success or failure of a novel than its author is. So Rich is probably right that the book doesn't work. I will, though, add one short comment to his second thread. As he says, I had to swap out some Tolkien things, most notably the names of my five 'wizards', since my publishers baulked (understandably) at tangling with the Tolkien estate's notoriously protective attitude to its copyrights. This is a shame, I think (as Rich says: the swap doesn't work nearly so well), and he's right that it means the valence of the eagles as last-minute redeemers gets muddied. The eagle is an American symbol as well, and all the things Rich says are right, I think, about how the novel is interested in forgetting, individual and collective, and my sense, from the far side of the Pond, of America as 'the United States of Amnesia'. But he misses the specifically punitive eagles quoted in the book's epigraph, Portrait of the Artist, which are about pecking out your eyes unless you apologise, or are perhaps more alarmingly if more importantly about how those two things are, in some sense, equivalents. Joyce was certainly very interested in Dante. Whole books have been written on this topic: '"The past," warns Reynolds, "encumbers even while it enriches and invigorates".' Well. Quite.