This Forthcoming The This 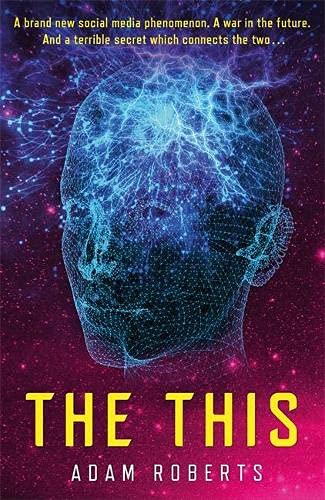 There's an Amazon page up now so I guess it's gone public: the cover of my next novel, due out February 2022 (or possibly a little later than that). The ‘terrible secret’ mentioned in the cover blurb might be that this is, in a manner of speaking, a science-fiction novelisation of Hegel's Phenomenology of Spirit (although of a much looser kind than was the case with my Kantnovel, The Thing Itself, which stuck quite closely, really, to the Critique of Pure Reason). ‘The This’ is a piece of Hegelian terminology. He was fascinated by the way ‘this’ is simultaneously the most general word imaginable, since literally anything can be a ‘this’, yet always intensely specific and individuated (this mug of tea, this person, this blogpost). Anyway, the novel is really about what this other blogpost calls ‘a Twitter analogue that may or may not be a nascent hive-mind poised to amalgamate all of humanity into a Borg-like synthesis.’ So I wouldn't worry too much about the Hegel side of things, if you'd rather not. It's all geisty good fun.

I wanted to use this line by Elvis Costello as my epigraph: when are you going to rise up? Wise up, Ghost. But though I tried several times I couldn't get copyright permission from Costello's people (couldn't, indeed, get so much as a reply) so I had to cut it. ‘What's that?’ I hear you ask. ‘Do you need to get and likely pay for rights clearance when all you're doing is quoting a single line from a pop song in a published book? Surely that counts as fair use!’ Oh my sweet summer child, no. Not in the least. Try dropping some Beatles lyrics into your next novel without clearing the rights, and wait for the lawyers' emails to come dropping into your inbox. Our copyright laws are messed up, really. But there you go.