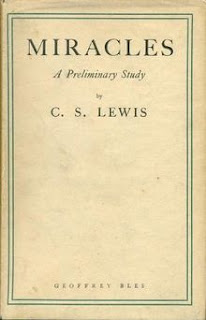 Generally speaking, the more I read of C S Lewis’s non-fiction the higher I rate his intellect; he has insight, lucidity, quiet charm and that most valuable thing, the ability to reframe familiar topics so as to make them seem fresh, even startling. Nonetheless, Miracles (1947)—which I read because I’ve been finishing up something on Tolkien and riddles, and I wondered if Lewis’s perspective on the paradoxical-miraculous might be useful (it wasn’t)—disappointed me. Bits of the book are neat; most of it is mired in a strange desire to reason from first principles towards proof of the existence of God, of an objective Moral Law and therefore of the possibility of miracles. The whole larger project to prove the existence of God seems to me more than a category error (although surely it is that); it seems to me the index to a prideful, almost blasphemous desire to force God into the straitjacket of human reason and logic. In his other writings Lewis is cannier than that; but here he argues doggedly from the position that ‘all possible knowledge depends on the validity of reasoning.’ Chapter 2 and 3, ‘The Naturalist and the Supernaturalist’ (basically: the former believes only the cosmos exists; the latter believes the cosmos exists because something outside the cosmos made it) and ‘The Cardinal Difficulty of Naturalism’—these chapters hang their argument on what Lewis considers a materialist logical double-bind. He quotes Haldane: ‘if my mental processes are determined wholly by the motion of atoms in my brain I have no reason to suppose that my beliefs are true and hence I have no reason for supposing my brain to be composed of atoms’; and adds:


Naturalism discredits our processes of reasoning or at least reduces their credit to such a humble level that it can no longer support Naturalism. [Miracles, 22]

Why? Because ‘all reasoning must begin with the Ground-Consequent because’ (ie, unless you can trace the logical chain of your reasoning all the way back to the Big Bang, and also ground that, you can't reason at all). The simplest counter-argument here is to say ‘phooey’. The thesis is: ‘materialism is absolutely wrong unless it can prove, by its own logic, that it is absolutely right.’ The unspoken correlative is: ‘Supernaturalism doesn’t need to do this, because it includes within its system a magic blank scrabble-tile that explains away all inconsistencies.’ Quite apart from this latter argument being a cheat, it has nothing to say to that version of materialism that deals not in absolute certainties—and which version of materialism is that, by the way?—but rather in balanced probabilities, in falsifiable theorems and so on. ‘We have not escaped from the difficulty,’ Lewis scolds the materialist, who traces the origin of consciousness through evolution. ‘We have only put it a stage further back’ [46]. As if saying ‘God did it’ doesn’t do exactly the same thing! Often Lewis is clumsily tendentious.


In a pond whose surface was completely covered with scum and floating vegetation, there might be a few water-lilies. And you might of course be interested in them for their beauty. But you might also be interested in them because from their structure you could deduce that they had stalks underneath which went down to roots in the bottom. The Naturalist thinks that the pond (Nature—the great event in space and time) is of an indefinite depth—that there is nothing but water however far you go down. My claim is that some of the things on the surface (i.e. in our experience) show the contrary. These things (rational minds) reveal, on inspection, that they at least are not floating but attached by stalks to the bottom. Therefore the pond has a bottom. It is not pond, pond for ever. Go deep enough and you will come to something that is not pond—to mud and earth and then to rock and finally the whole bulk of Earth and the subterranean fire. [Miracles, 45]

The analogy is false: because we know ponds have bottoms we are invited to mock the stupid Materialist who thinks they don’t. Of course cosmologists don’t talk about ponds; they talk about the whole cosmos. It’s Lewis who is bringing ponds into it. He is insinuating that there is something belittling in the Materialist vision of the universe: ‘silly materialist thinks the universe is a scummy pond—I know better, I can see the grandeur of the subterranean fire.’ But actually it’s the other way about. Asimov’s cosmos is vastly bigger than Dante’s, after all. Modern science says we are drifting perilously in infinite space; it's the New Testament that says we live in a sheepfold.

Chapter 5 is called ‘A Further Difficulty in Naturalism’. The further difficulty is the impossibility of morality unless that morality is underpinned by absolute, divinely-sourced right-and-wrong. Were I minded to call a spade a spade, I'd suggest Chapter 5 is idiotic—a harsh judgment, and one I would almost never apply to Lewis, but there you go. The choice is starkly laid out: either you believe in absolute good and evil or you believe ‘all ideas of good and evil are hallucinations’ [57]. Taking it as axiomatic that materialists believe this latter (materialists ‘like Mr H G Wells’ and ‘General Franco’), Lewis then attacks materialism for hypocrisy: ‘a moment after they ['Naturalists'] have admitted that good and evil are illusions, you will find them exhorting us to work for posterity, to educate, revolutionise, liquidate, live and die for the good of the human race.’ ORLY? ‘If the “oughts” of Mr Wells and Franco are both equally the impulses which Nature has conditioned each to have’ they ‘tell us nothing about any objective right or wrong.’ [58] It is not clear to me why a thing must be classified as absolutely good or absolutely evil before we can talk about its goodness or wickedness. Indeed it is hard for me to think of any examples of things that could be described as 'absolutely' moral or immoral. But Lewis’s argument is that a thing must be ethically absolute, or at least grounded in such, and can never be—let us say—better or worse. This doesn’t seem to me to map onto the world. Unless I give a million pounds to this beggar on the street, there is no good in me giving him a fiver. Or more realistically: the question as to whether a country should go to war is, whatever else it is, an ethical question. All war will involve misery and death, and most of those who will suffer will not deserve so to suffer. Nonetheless, going to war is sometimes the right thing to do (and sometimes the wrong). Lewis's argument is that unless we are sure that the war is 100% right, and contains no quantity of wrong, we cannot make it. ‘Now I know,’ says Lewis’s caricature Materialist, ‘that my impulse to serve posterity is just the same kind of thing as my fondness for cheese … its transcendental pretensions have been exposed for a sham…’ [59] This is presented as what Humpty Dumpty was pleased to call ‘a nice knock-down argument’. But it’s far from glorious. I can argue that my impulse to serve posterity is the same kind of thing as my impulse to eat cheese without sacrificing my belief that one of these two things is more important than the other. Lewis’s argument, in a nutshell, is: ‘if I value justice, and I value cheese, then this is tantamount to admitting I treat these two things as exactly the same.’ To repeat myself: phooey.

Wait: I’m turning snide. There are good things in Miracles too. And it occurs to me that it would be a mistake to decontextualise the book. It came out in the immediate aftermath of the horrifying misery and mass-death of World War 2. There was strong pressure on those trying to make sense of life in the late 1940s to find something ‘outside’; since it so strongly appeared we, left to our own devices, had the capacity of almost unending autotorture. Olaf Stapledon’s SF novella The Flames, though not Christian, articulates the same urgent desire. In it, gaseous alien beings are woken from their ineffable slumbers by ‘the fires of war’ and establish telepathic communication with humanity. They request a permanent base on our planet.


In return we offer you the salvation of mankind, if I may so put it. As I have already told you, though we are novices in the physical science, our science of the spirit is far more developed that yours. And it convinces us that, without some kind of spiritual help from outside, your species is doomed. [Stapledon, The Flames (1947), 104]

Lewis’s book is informed by the same sense. He is perfectly upfront, actually, that where ‘Naturalism’ is to be judged for what it is, religion should be judged instrumentally, for what it can do for us—something that relieves it of the same burden of proof and analysis. ‘A drowning man does not analyse the rope that is flung to him’ [120] is the way Lewis puts it.