Out of the Frye-ing pan 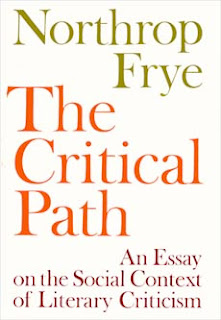 This caught my eye:


The basis of critical knowledge is the direct experience of literature, certainly, but experience as such is never adequate. We are always reading Paradise Lost with a hangover or seeing King Lear with an incompetent Cordelia or disliking a novel because some scene in it connects with something suppressed in our memories, and our most deeply satisfying responses are often made in childhood, to be seen later as immature over-reacting ... As a structure of knowledge, then, criticism, like other structures of knowledge, is in one sense a monument to a failure of experience, a tower of Babel or one of the "ruins of time" which, in Blake's phrase, "build mansions in eternity". [Northrop Frye, The Critical Path: an Essay on the Social Context of Literary Criticism (1971), 27]

I think this resonates so strongly with me partly because science fiction was something I fell in love with as a child-reader. I still love it; still write it and write about it. But I'm increasingly conscious of the ways in which the exercise is based upon a kind of structural hermeneutic inadequacy. 'Our most deeply satisfying responses are often made in childhood, to be seen later as immature over-reacting' is almost a too perfect thumbnail of the adult apprehension of SF; and SF criticism always a kind of running-to-catch-up uttering various post-facto justifications. What's neat about this Frye quotation is the sense it conveys that, actually, all criticism is in the business of doing this.
Posted by Adam Roberts at 08:45