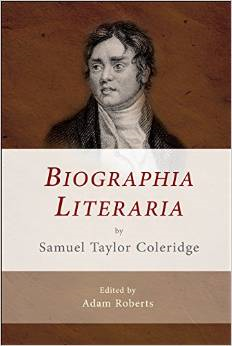 One main reason I started this blog in the first place was to have a venue for thoughts and nuggets thrown up by the work I was doing creating the new edition, pictured above, of Coleridge's groundbreaking work of literary criticism and theory. And now, finally, the edition has been published. A snip at, oh, £150. Hmm. That is dear. Ah, but you can't put a price on a genuinely comprehensive version of this masterpiece, one that finally tracks down all the allusions and quotations previous scholarship has been unable to source, and one (moreover) that uncovers crucial new facts about its composition. Can you. (Can you?) Why, the introduction alone is 165 pages! That's practically a standalone monograph. (It seems the edition is not released in the US until 1st October, when a paltry $250 will make it yours).

So, yes: I hate to beg, but if you have ordering rights at a University Library, or indeed a Public Library, and if you were prepared to put in an order for a copy for this title, I'd be very grateful. If you did, and let me know that you'd done so, I'd be even more grateful. It is a good edition, though I say so myself; and whilst I know I'm never going to make any money out of the two years I put into fashioning it, it has won me over to the extent that I'd really like to see it reinserted into the larger discussions around Romanticism and literary criticism -- from which, I think, it's kind-of fallen away.

The bonus, if you can all it a bonus, is: if EUP sell a moderate number of these they'll let me edit more Coleridge: Lectures on Shakespeare and Aids to Reflection are lined up next, followed by Church and State and Poems. Who wouldn't want to see new editions of those titles published? It's not a kickstarter, because it's already started. It's a kickcontinuer. And with library funds rather than your own.

Or, you know: not. That would also be cool.