Doctor Panurgus Curing the Folly of his Patients by Purgation (c.1630) 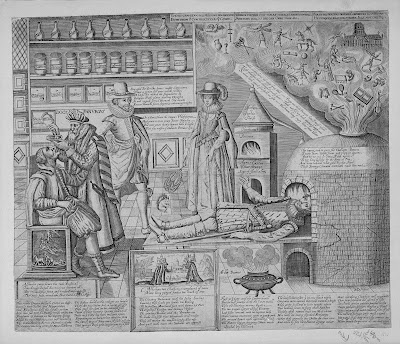 Isn't this splendid? It's by Martin Droeshout, he of the Shakespeare First Folio portrait. From that Wikipedia link we learn that it's:


an allegory of the follies of modern life, depicting figures representing Country, Town and Court life being treated by the doctor. The design has a complicated ancestry, being an adaptation of an earlier print by Greuter, which itself drew on emblem book designs. Droeshout, or perhaps an unknown person who designed it, seems to have made a number of specific elaborations of the image, including extensive text, adding extra characters and English and Latin phrases, notably verses explaining how the doctor is purging the three figures of their respective moral illnesses. He pours "Wisdome and Understanding" down the throat of an ignorant rustic and smokes the brain of the "gallant" (courtier) in an oven to burn away the vanity in it (represented by various images going up in smoke). Two other figures wait to have their own brains smoked. Inset are other designs referring to the religious controversy of the era over pluralism. The whole is filled with boxed passages of satirical moral verse of unknown authorship.

Click to embiggen, so as to see the varied 'fancies' that are being sublimed out of the court dandy's head: lots of passtimes and games, from musical instruments and backgammon to hunting with dogs; but also two theatrical masks, and a whole big church with a man falling off the roof, perhaps an over-elaborate way of suggesting insufficient piety. I presume the brick kiln is cracked not to indict the equipment of the good doctor but rather to suggest the very great heat necessary to boil such deep-rooted fancies away. Also, there's this fairy fellow. What's he about? 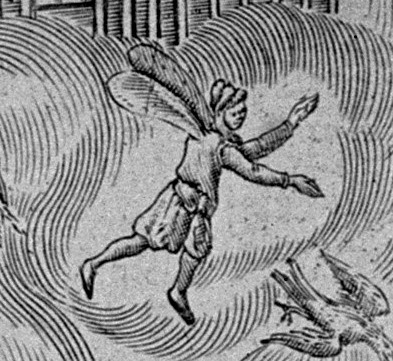