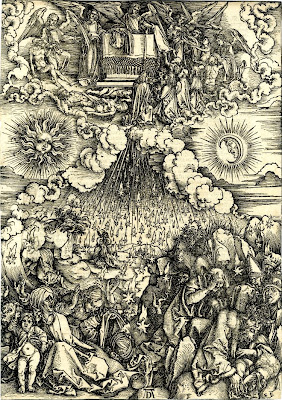 Relevant to my thoughts on the Protestant Reformation as the crucible of SF, this time with reference to imagining the future in secular terms (or as ‘future history’, which is, of course, one of the core strategies of the genre):


Unlike national prophets who, in the process of sacralising English history, risked losing their past in an ahistorical eternity, other Elizabethan writers attempted to turn the divine prophesy of Revelation into history, making it available as a source of national articulation. As John Pocock has shrewdly observed, “apocalyptic, which sacralises secular time, must always in an opposite sense secularize the sacred, by drawing the process of salvation into that time which is known as saeculum. In the sixteenth century perhaps more than at any earlier period, English Protestants broke with the idealist, Augustinian interpretation of Revelation in favour of a historical interpretation. [Andrew Escobedo, Nationalism and Historical Loss in Renaissance England: Foxe, Dee, Spenser, Milton (Cornell University Press, 2004), 81]