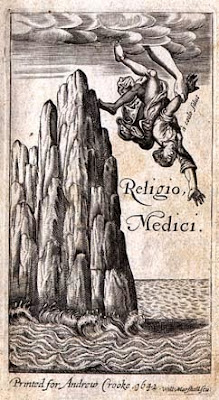 I've started reading Sir Thomas Browne's Religio Medici (1642), a work to sip rather than gulp down. Browne was a medical doctor, and 'religio medici' means 'a doctor's religion' or 'a physician's religion.' The title aims at playful paradox, for doctors were notorious in the 17th-century for their atheism. C A Patrides, in whose Penguin edition I'm reading the work, quotes a contemporary proverb: Ubi tres medici, duo Athei: pick any three doctors and two will be atheists. Not Browne, though. He writes beautifully and movingly and strangely about his own Christian faith.

That's the frontispiece, up top: a lovely and striking image. The Latin spooling out from the bent-backwards, tumbling figure's breast is: à cælo salus. It means 'from heaven, salvation', hence the angelic or divine hand reaching down to prevent the fall. It also means 'health comes from heaven', which is appropriate sentiment for a religious physician. Patrides doesn't say where the Latin is quoted from; so I poked about online. Nobody seems to know! So I poked around further. Origen (in his Third Homily on the 36th Psalm) says in cœlo salus iustorum, 'in heaven is the salvation of the just'; but that's not quite the same thing. This 1742 book claims the phrase originates with 'Galen, Hippocrates' and other physicians, but I can't find any original sources for either name. At any rate, the success of the Religio Medici seems to have popularised the phrase post 1642. Below is the simply splendid frontispiece from John Northleigh's The triumph of our monarchy, over the plots and principles of our rebels and republicans (1685), a Royalist polemic that claims, as you can see, that it is from heaven and Caesar (the King) that salvation comes. 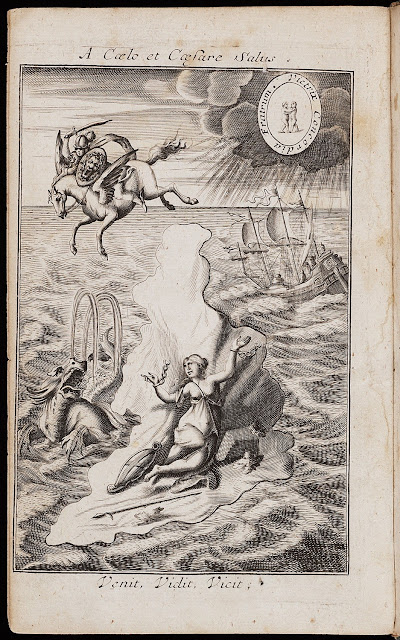 Just so much to love in that image! The blobbily approximate shape of the British Isles, the sea-dragon firing two jets of watery snot at Britannia, the foundering ship, and of course the flying knight zooming in to save the maiden.
Posted by Adam Roberts at 13:19