Alice 2: Up With The Smoke And How Alice Flew; or, How I'd Like To Write A New Alice Book 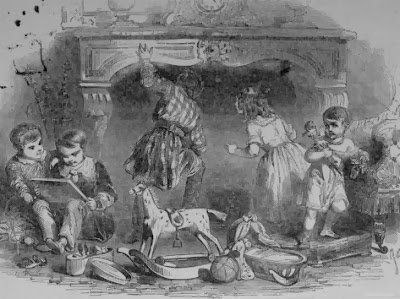 If the rule of three should obtain anywhere, it ought to apply to the fairy tale logicworld of the Alice books. Nor am I the first person to think so. I remember buying Gilbert Adair’s sequel to Wonderland and Looking-Glass when it came out in 1984: Alice Through the Needle's Eye: A Third Adventure for Lewis Carroll's Alice. And it’s not bad, considering; though it reads as dilute compared to the incomparable originals. Alice trying and failing to thread a needle finds the eye growing bigger, falls through and into haystack, which turns out to be a stack of the letter ‘A’. The narrative then strings a series of pun-based animal encounters along an alphabetical conceit (she meets a spelling bee, then two cats joined at the tail who recite the poem ‘The Sands of Dee’; then she meets an elephant and—you get the idea). Needle-land literalises metaphor, so that when it rains cats and dogs actual cats and dogs fall from the sky. Yet somehow, and despite Adair’s fertile imagination the worldbuilding never quite reaches the sprightly solidity of Carroll’s. Of course, that’s a high bar to set for any writer.

Now: I’ve been thinking how might I do the same thing. It’s an idle rumination, since no publisher is looking for a new third Alice book right now. On the up-side, I happen to know the only contemporary illustrator who can hold a candle to Tenniel; and I’d be prepared if necessary to give him the third degree and compel his collaboration by Main Force. Auspiciously I am, like Carroll, also called Charles—my middle name, a family heirloom passed from grandfather to father to son and onto my own boy; though by the same token ‘Robert Carroll’ would be a pseudonym too vainglorious and overreaching to countenance. But since I’m engaged only in thought-experimentation and not actual writing, there’s no reason to hold back. 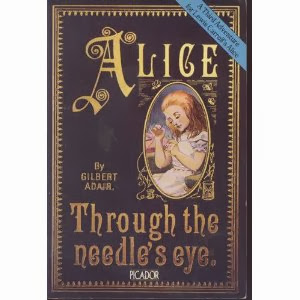 It seems to me that the problem with Alice Through the Needle's Eye is that Adair gets the balance wrong between rigid logic and surreal fantasy. By ‘wrong’ I mean: he doesn’t weight it the way I’d say Carroll would have done, had Carroll actually written a third volume. A rule of three should progress according to its own logic. So Wonderland is set in the summer, in the countryside, and construes its fantasy via the kind of pastime—card games—a young girl is likely to enjoy in such a setting. Looking-Glass is set in the autumn, in a more regimented and neatened version of nature (we might say: the suburban garden) and the story parses a different, more indoor pastime: chess. The third instalment should, accordingly, be set in the winter (let’s say: Christmas, or New Year), in the city, and be structured according to a third game or pastime—I’m going to go with: snakes and ladders. Adair, though, reverts to summer countryside, and jettisons the game trope altogether, relying instead (shudder) on chores—needlework! Learning one’s letters!—as his organising principle. His book also lacks any of the sense we get from Carroll’s two books of childhood slipping away ... I mean, the way Looking Glass is more autumnal in tone as well as setting. The third book would surely extrapolate this further. Conceivably, this fact alone explains why Carroll never got around to writing it.

One further consideration: Wonderland traces a downward journey, into the underworld (Alice’s Adventures Underground was Carroll’s original title, of course). Through the Looking-Glass is a horizontal transformation, sideslipping into an alt-England. Through the Needle’s Eye is mere repetition of trajectory. Clearly what we need is a journey upwards.

On the other hand, Adair gets several things right. One is his decision to keep the frame of reference as a kind of generic Victorian: nothing too period specific, but certainly no attempt to shoehorn in contemporary childhood references—how ghastly a sequel would be if it included cellphones and pop music references. Adair pastiches the Carrollian style pretty well, though erring a little on the side of tweeness. Will Brooker, in his excellent study of the reception and interpretations of the Alice books [Alice’s Adventures: Lewis Carroll in Popular Culture (Continuum 2004)], calls Adair's book ‘an intelligent fake’, which is right, I think. But he also thinks it lacks structure, or lacks the right kind of Carrollian structure, and I think that's right too. The alphabetical conceit doesn't have enough narrative or imaginative force, and ‘the characters Alice meets do not seem to follow a clear system, like those in Wonderland and Looking-Glass … Jack and Jill are from a nursery rhyme and the Country Mouse from a fable; the Grampus and the Hairdresser have the same rhythm to their names as the Walrus and the Carpenter … but the main theme throughout is simply encounters with talking animals, some of whom take their names and characteristics from a play on words.’ [Brooker, 168]

So, in my thought-game, the third book should be Up. Alice playing snakes-and-ladders with her two sisters before a roaring fire, on New Year’s Eve. She ponders what magic it is in the fireplace that is able to transform so heavy a thing as a massy log into airy smoke and bright upward-snaking flames; and (of course, falling asleep) she swooshes up the chimney. Inside a sooty chimney is a nicely Victorian location, and Alice might encounter a whole society of sweeps. The pillars and banners of smoke can be as serpentine, or as ladderishly elevating, as the game-conceit needs. And however long the phantasmagoric chimney flue might be, lit by the sparkles of fire and containing any number of crisped, sooty or urban characters, Alice would surely eventually emerge into the night sky above. An aerial Alice could move continually upwards, through citied clouds and hairy comets, to an Orlando-Furioso moon, upon which the little dog is still laughing to see such fun. 21st-century readers have enough of a solid sense of Victorian city life to enable a wide range of reference and playful iteration of 19th-century tropes. What title to choose is a poser, mind. Alice Up The Chimney is a touch too double-entendre for our purposes, I think; and Alice Goes Up In Smoke rather suggests that she explodes. After consideration I think I’d go with Up With The Smoke, And How Alice Flew. Flue, see. Flew.

But there’s one serious, or semi-serious, point in all this fanciful speculation. It relies on the sense, which I argue elsewhere on this blog, that Carroll’s playful levity, his lightness of comic touch, is not incompatible with seriousness. On the contrary, comedy (especially English surreality) is a surer ground of seriousness than po-faced gurning. And what this third Alice book would pinpoint is the buried Dantean structure in Carroll’s narrative. In the first part, Alice goes into the underworld, meets creatures transformed into various monstrous shapes by their rigid natures—except that where Dante is all moral and finger-wagging and doleful-countenanced by what he sees, Carroll plays the resulting peoplescape for laughs—not only more enjoyable, but more ethically and aesthetically eloquent. In part two Alice moves horizontally into a more structured environment. Where Dante figures a mountain with seven terraces (one for each deadly sin) followed by a summit that leads the traveller to heaven, Carroll imagines a chessboard where Alice moves through seven squares before passing, in the eighth, into her queenly apotheosis. A third Alice book should surely move, like Dante, up into the sky. And there should be a rose at the end of it.

One bubble more? Why not? 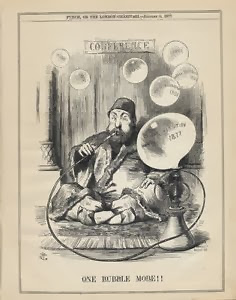