Arnold's 'Dover Beach': the Shipwreck of Faith as Nuptial Song 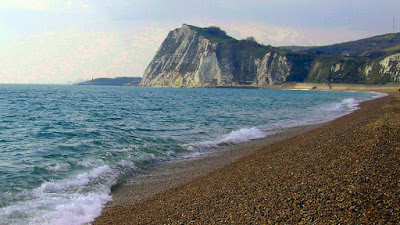 Arnold's 'Dover Beach' (written 1851; published 1867) probably is the most famous short poem of the Victorian period. And with good reason, for it is a marvellously made, if mournful, piece of writing. It is likely, critics and scholars assure us, that this poem may indeed have been at least partially written on Arnold's honeymoon with his new wife, Frances Lucy Wightman, in Dover, 1851. So 'Dover Beach' probably is a nuptial song, though of a rather strange kind. Here's the speaker, in a hotel room, looking out at the moonlit English channel, calling his new bride to the window so she can join him in admiring the view.


The sea is calm tonight.
The tide is full, the moon lies fair
Upon the straits; on the French coast the light
Gleams and is gone; the cliffs of England stand,
Glimmering and vast, out in the tranquil bay.
Come to the window, sweet is the night-air!
Only, from the long line of spray
Where the sea meets the moon-blanched land,
Listen! you hear the grating roar
Of pebbles which the waves draw back, and fling,
At their return, up the high strand,
Begin, and cease, and then again begin,
With tremulous cadence slow, and bring
The eternal note of sadness in.

I love the way that 'only ...' acts as hinge around which this first verse-paragraph swings from tender romantic apprehension of the nighttime beauty to sadder state of mind. 'Dover Beach' is wholly a poem about the ebb and the flow, externalised and epitomised by the waves washing up the shingle beach and then draining back to sea again. The ebb and flow of one person's moods; the ebb and flow of Christian faith (Isobel Armstrong calls it 'a threnody on the lost myth of Christianity' [Victorian Poetry: Poetry, Poetics and Politics, 173]. There's real technical prowess in the ways Arnold here actualises that pulsing dynamic. For instance, the alternation of, on the one hand, phrases punchy with 'b', 'g' and 't's, with, on the other, phrases laced with sibilance—begin, and// cease, //and then again begin with tremul//ous cadence slow// and bring the eternal note of // sadness //—onomatopoeically reproducing the unequal alternation of waves thumping onto the shore, and then hissing back through the pebbles. Or look at the prosody of the first six lines: the first three are all regularly iambic (except for the quick-quick-slow-slow of 'on the French coast'), rocking us into the poem with that workhorse of English poetry, the 'unstressed-stressed' disyllabic poetic foot; but the next three lines all start on stressed syllables, only, where, listen, subtly shifting the weight of the poem from iamb to trochee, actualising the ebb and then the flow.

That said, the poem as a whole is rather more ebb than it is flow. Arnold's voice grows mournfuller, as the sea of La Manche makes him think of the Sea of Le Bon Dieu:


Sophocles long ago
Heard it on the Ægean, and it brought
Into his mind the turbid ebb and flow
Of human misery; we
Find also in the sound a thought,
Hearing it by this distant northern sea.

Once again, lovely delicate work from line 21 ('The Sea of Faith ...') on: four lines of steady, unchoppy monosyllables (save only 'girdle' and 'only') stepping up and up to a gorgeous line and a half of falling-away polysyllables ('melancholy withdrawing retreating'). The aforementioned critics and scholars aren't sure which bit of Sophocles Arnold had in mind here. The consensus is that he was thinking more of a broader Sophoclean mood than of a specific quotation. I disagree. My theory is that, with the shingles hissing and rattling beneath his honeymoon hotel window, Arnold was put in mind of the last speech of Sophocles' Philoctetes, as Englished by William Crowe on the title page of Crowe's most famous work, Lewesdon Hill (1788):


Farewell thy printless sands and pebbly shore!
I hear the white surge beat thy coast no more.

Though it purports to be a translation from Sophocles, actually much of it is Crowe rather than The Greek (I go into tedious detail on this subject here). I could be wrong about it being behind Arnold's thoughts here: though there certainly is a flavour of exile about it. And exile is certainly the tone for Arnold poem. We might think that odd: after all, he's not exiled. On the contrary, he's in his homeland with the woman he loves and has recently married . Except that in this poem he's not in his homeland with the woman he loves so much as he is banished, Ovid-like, to the shores of a 'distant' sea. Distant from where? From Greece, and Jerusalem, topographically; from wholeness and health artistically and spiritually speaking.


Ah, love, let us be true
To one another! for the world, which seems
To lie before us like a land of dreams,
So various, so beautiful, so new,
Hath really neither joy, nor love, nor light,
Nor certitude, nor peace, nor help for pain;
And we are here as on a darkling plain
Swept with confused alarms of struggle and flight,
Where ignorant armies clash by night.

That Keatsian darkling recomposes the ebb and flow of the Dover waves as confused and chaotic military advances and retreats across a night-time battlefield, and the Sea of Faith has become a Sea of Fighting.

'Sea of Faith' is, of all the famous quotable-bits in this endlessly recirculated poem, the most quoted. There's even an international organisation called 'Sea of Faith', inspired by the work of English theologian Don Cupitt, whose 1960s book and TV serial was also called Sea of Faith. There have been a slew of books since with the same title: Jon Butler's Awash in a Sea of Faith: Christianizing the American People (1992), Stephen O'Shea's Sea of Faith: Islam and Christianity in the Medieval Mediterranean World (2012), John Brehm's Sea of Faith (2004) and so on.

Where does this phrase come from? Or, since the answer to that question is 'out of Arnold's head', I suppose I mean: what was he thinking of, what influenced him? By way of answering that, I wonder if Arnold had been put in mind of 1 Timothy, the New Testament pastoral epistle supposedly written by Saint Paul. 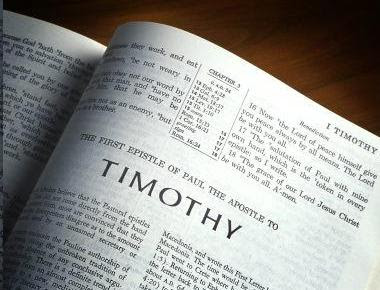 In the first chapter of this epistle, Paul warns of certain heretics who have strayed from the true faith and led others astray. Paul commends Timothy, in the KJV's words, to 'faith unfeigned, from which some having swerved, have turned aside unto vain jangling' [1 Timothy 1:5-6]. Jangling is a nicely striking word, I think. The Greek is ματαιολογίαν, which means 'vain, idle or foolish talk' (you can see the speech-y or word-y λόγος in the second element there); but the KJV makes a kind of shingle-like rattle or clatter out of the sentiment. And a sea of faith is implied by Paul's lamenting a 'shipwreck of faith':


This charge I commit unto thee, son Timothy, according to the prophecies which went before on thee, that thou by them mightest war a good warfare; holding faith, and a good conscience; which some having put away concerning faith have made shipwreck: of whom is Hymenaeus and Alexander; whom I have delivered unto Satan, that they may learn not to blaspheme. [1 Timothy 1:18-20]

Maybe 'war a good warfare' is the protoype of which Arnold's ignorant armies is the inverted antitype, which in turn makes me wonder if what the armies are ignorant of is not just their own and their enemy's troop disposition, but Faith itself. And what of Hymenaeus and Alexander? What they have done, in the Greek, is πίστις ναυαγέω, 'to shipwreck [their] faith'. 'Sea of Faith' is not a NT phrase, but if we wanted to NT-Greek it, we would get θαλασσα πίστεως, which is an appropriately maritime, sibilant-hissy couple of words. Presumably Hymenaeus and his friend were sailing the Sea of Faith, until their heresy wrecked them. Nobody seems entirely sure what their heresy actually entailed; Wikipedia suggests Hymenaeus may have been denying the future resurrection, but adds 'It is impossible to define exactly the full nature of this heresy'.

I don't suppose Arnold had any better idea what Hymenaeus's heresy was, but I am sure he knew what the Greek word ὑμέναιος, hymenaeus, means. It means 'a nuptual song', and also 'marriage, wedding, nuptials'. The sailor wrecked on the Sea of Faith turns out to be the very substance and purpose of 'Dover Beach' itself: a nuptial song, a hymenaeus. Epithalamium as elegy.

---
PS: So I say Arnold coined the phrase 'Sea of Faith'. That's probably true. Then again, Eusebius did write a book, the Liber de Contemptu Mundi, in which he implored Christ 'inducere nos in secreta spiritualia. et mare fidei aperire in animo nostro', to reveal to us spiritual secrets and to open our souls to the sea of faith (see here, if you're interested). How likely is it that Arnold knew this? It's not a famous bit of text. He does mention Eusebius in God and the Bible, but not in the way that suggests he's delved deeply into the guy's voluminous writings. He's not Coleridge, after all.
Posted by Adam Roberts at 04:48