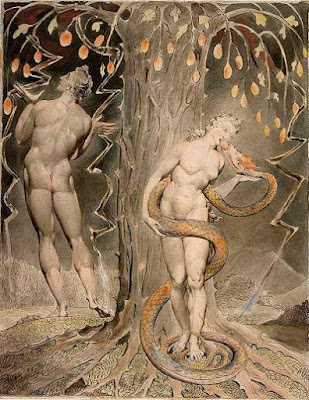 Felix culpa means fortunate fall, or lucky delinquency, and is one of the central theological problematics not just of Milton's Paradise Lost but of Christianity itself. Adam's sin brought death into the world; but then again it's fortunate Adam fell, insofar as it set-up Christ's salvation. Or, indeed: 'if the Jews had not prevailed upon the Romans to crucify our Lord,' as Disraeli says in Tancred, 'what would have become of the Atonement?':


Could that be a crime which secured for all mankind eternal joy? Which vanquished Satan, and opened the gates of Paradise? Such a tenet would sully and impugn the doctrine that is the corner-stone of our faith and hope. Men must not presume to sit in judgment on such an act. They must bow their heads in awe and astonishment and trembling gratitude.


O goodness infinite, goodness immense!
That all this good of evil shall produce,
And evil turn to good; more wonderful
Than that which by creation first brought forth
Light out of darkness! full of doubt I stand,
Whether I should repent me now of sin
By mee done and occasiond, or rejoyce
Much more, that much more good thereof shall spring,
To God more glory, more good will to Men
From God, and over wrauth grace shall abound. [Paradise Lost, 12:469-78]

Abound, at the end there, gestures towards Romans 5:20: 'Moreover the law entered, that the offence might abound. But where sin abounded, grace did much more abound'. And there's something deliberately springy about that bounding, a play on words: that sin which binds men shall also give men the sprightliness to bounce free. People think of Milton as a ponderous sort of poet, and in some senses he is, but he is also playful, sometimes wittily so. The whole point of this passage is that sin is not a terrible end, but is instead the germ of something wonderful. And look there at the first line there: goodness infinite contains at its very heart, the last letter of goodness and the first two of infinite, sin. Sin, Milton is intimating, is the very kernel of infinite goodness. 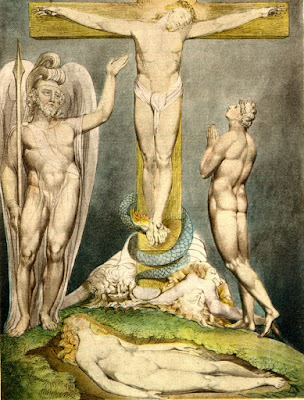