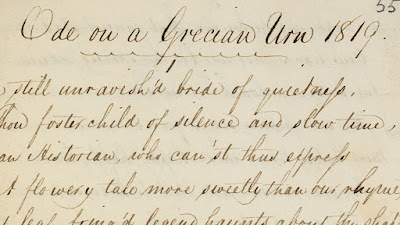 Lots of famous people attended Coleridge's 1811-12 course of lectures on Shakespeare and Milton: Hazlitt, Crabb Robinson, Aaron Burr, Mary Russell Mitford, Samuel Rogers and Lord Byron. But as Richard Holmes notes there were two important absentees: ‘the seventeen year-old John Keats, who had just begun attending surgical lectures at St Thomas’s Hospital, across the river by Westminster Bridge; and the nineteen-year old Percy Bysshe Shelley, who had just eloped with his first wife Harriet to Edinburgh’ [Holmes, Coleridge: Darker Reflections, 267]. That means that when, in lecture 8, Coleridge talked of 'Shakespeare the philosopher, the grand Poet who combined truth with beauty and beauty with truth', John Keats was not one of those who heard him. And since the lecture was not published in Coleridge's lifetime, he can't have read the words either. Still, it's a striking coincidence that Keats most famous poem builds to precisely that equivalence:

The beauty/truth equivalence has always fascinated me, in part because I'm really not sure what it means. And because I'm spending time at the moment reading the proofs of a forthcoming EUP edition of Coleridge's Lectures on Shakespeare, I wondered a little if maybe, on the evening of the 12th December 1812, Keats bunked off his actual studies and crossed the river to hear this. Not likely, though. And, deciding to rummage around a little in the eighteen-teens, I soon discovered that he didn't need to hear these words fall from Coleridge's lips. Because the truth-beauty equivalence was everywhere.

It could have been, for instance, that Keats had been reading Mark Akenside's long didactic poem The Pleasures of the Imagination, first published in 1744 and often reprinted (for instance in 1819, when Keats was drafting his Ode). Here's the 1819 publisher's argument to the poem: Or maybe Keats browsed a little in the new 1816 translation of Proclus, the Platonist, who has a great deal to say about 'the triad symmetry, truth, and beauty.':


If, however, truth is indeed the first, beauty the second, and symmetry the third, it is by no means wonderful, that according to order, truth and beauty should be prior to symmetry; but that symmetry being more apparent in the first triad than the other two, should shine forth as the third in the secondary progressions. For these three subsist occultly in the first triad ... For we have spoken of these things in a treatise consisting of one book, in which we demonstrate that truth is co-ordinate to the philosopher, beauty to the lover, and symmetry to the musician; and that such as is the order of these lives, such also is the relation of truth, beauty, and symmetry to each other. [192-93]

This is less improbable than you might think: the translation in question was by Tom Taylor, brother to Keats's friend and correspondent John Taylor. Indeed, the more I look, the more it strikes me that loads of people in the eighteen-teens were debating the Beauty-Truth equivalence.