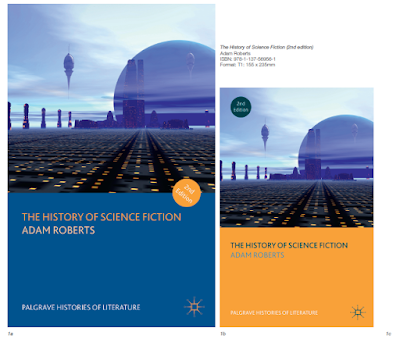 Do you know what I've been doing for the last five (that's five) full days? Checking the proofs of, and compiling an index for, the above title, the forthcoming 2nd edition of my Palgrave History of Science Fiction. The first edition was 320pp. This second edition is 540pp. Quite a lot longer: every chapter has been revised and a whole new (and lengthy) chapter on '21st Century SF' added. The indexing was made more onerous than it might otherwise have been by virtue of (a) this overall lengthiness, and (b) the fact that a vol such as this is inevitably proper-name-heavy and dense with indexible stuff. Woh. Five days, though! It's true that Palgrave gave me the option to hire a professional indexer to do the job for me, but his or her fee would have been more than I'm likely to earn in royalties from the sale of the finished volume. Don't get me wrong: I admire professional indexers, and think them worthy of their hire. It's a tricky, laborious and skilled job. But I'm not rich enough blithely to pay the hundreds of pounds they deserve as their fee out of my own pocket; and even if I did, that would still leave the (lengthy, fiddly) proofs to do. No shortcut there.

I did suggest to Palgrave that the index should read, in its entirety,

But d'you know what, blood? I isn't allowed.

I think one reason I find compiling indices so frustrating (apart, that is, from the brute fact of, you know, actually compiling them: monotonous, repetitive, dull) is that a part of me believes they ought to have gone the way of, let's say, the old hand-assembled concordances. Useful once upon a time, such works have now been so thoroughly superseded by search engines and suchlike algorithms that they're left, in those libraries that have yet to get rid of them, like Easter Island Heads, proud among the wilderness. You think: 'years, perhaps decades of some poor human's life were consumed by this project!' Then you shake your head sadly and move on. Surely The Index is going this way? And the five days of my life I've just expended on this particular task? Phew.
Posted by Adam Roberts at 08:25