The Cast of Outcast's Inn So, there we have the title page to Modern Times, or, The Adventures of Gabriel Outcast (3 vols 1785), by John Trusler. Now: I was, for reasons that need not detain us, browsing through this fantastically obscure novel on Google Books earlier today, when I came across this little episode: Ho ho. Anyway, this gave me pretty sharp déjà vu, and I found myself thinking: surely I'd read a similar scene in a nineteenth-century novel? Not one of Dickens's, I think, since I know them all pretty well; but maybe I'd read a scene like this in one of his occasional essays or stories, a Household Words or All The Year Round shorter piece? Or was it Thackeray? And if so, was one of these gentlemen slyly plagiarising poor old obscure Trusler? That might be worth knowing, if so. But I couldn't pin it down. Google was no use, so I posted a cry-for-help on Facebook. 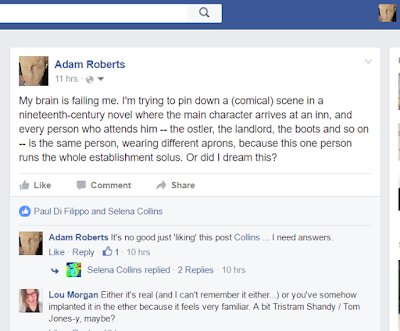 Suggestions came in thick and fast, some of them blind-alleys (Tristram Shandy, Tom Jones, Henry Esmond). Karl Steel suggested The Phantom Tollbooth, which might indeed have been the source of my personal déjà vu, but, obviously, isn't a nineteenth-century novel (I couldn't shake my sense that there was a nineteenth-century version of this). Christine Ferguson, who certainly knows her 19th-century literature, said 'it's not what you're looking for, but this is essentially what happens to Jonathan Harker at Castle Dracula', which is certainly true but, as she notes, not what I was looking for. Ian Watson said this had actually happened to him in a hotel in Hungary. Jayaprakash Satyamurthy claimed he once read a Donald Duck story 'where Scrooge puts Donald in charge of a hotel. Scrooge comes to stay at the hotel incognito and Donald poses as the bellboy, concierge and so on.' I like to think that Jayaprakash reads more than just Donald Duck stories nowadays, but, you know: who knows? Jared Shurin noted that it happened in an I Love Lucy episode, and Nick Harkaway insisted it was a common gag, though he couldn't think of any particular examples.

By the end of this, process I found myself coming to the conclusion that actually this joke is one of those culturally ubiquitous comedy sequences, often recycled and repurposed. That in itself might explain my sense that I'd come across it before. But if so, then another question presents itself: is this version, in Trusler's 1785 Gabriel Outcast, the first version in print?
Posted by Adam Roberts at 13:05