The Horses of Westworld 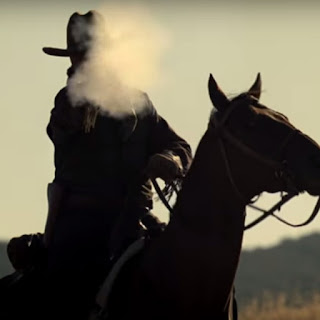 I enjoyed the first episode of HBO's already-acclaimed Westworld series. Even episode one manages to say some deftly clever and unsettling things about entertainment, the abusive objectification of bodies (especially female bodies) and about the intimate relationship between fantasies of the 'true' originary American west and questions of power, violence, myth and horror. Of course one episode in is jumping the gun somewhat; and (of course) given the way the show is patently working on several layers at once, I feel sheepish about devoting this blogpost to one aspect of the in-story logic of the show's worldbuilding. Indeed, I feel doubly sheepish doing so, since it is one of the limitations of weaker SF criticism that it obsesses over in-text elements at the expense of formal, contextual and metatextual readings. Still: the horses.

The horses puzzle me.

'Westworld' is a park where real human beings come to play at being cowboys and cowgirls, in a sort of live-action RPG with added sex and violence. The characters with whom these holidaymakers interact are replicants, programmed with sophisticated-enough responses that they mimic human variability and liveliness, but memory-wiped (and if necessary repaired and rebooted) at the end of each day. It's already clear that one of the larger through-lines of the series will be the notion that Anthony Hopkins' lizardly-placid Dr. Robert Ford, Park Director and inventor of the androids, has, by adding new subroutines and tweaks to their programming over time, eased them into something like actual sentient consciousness. We'll see about that.

The show divides between portions set in Westworld itself, and other portions set in the behind-the-scenes control spaces and lower levels, where we see the replicants being constructed. 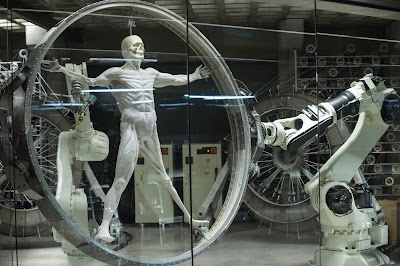 Now, in present day theme parks, Renaissance Fairs and the like, visitors interact with other human beings. But Westworld is a park where such interaction might include shooting, killing, torture and rape. Clearly human beings could not ethically or practically be hired to perform the subaltern roles in such a circumstance. Hence: robots. But the underground workshop scenes of the show make it clear that not only the people, but also the horses, are artificial organisms.

The problem I'm having is imagining any kind of economic context in which it would make financial sense for the Westworld company to manufacture expensive artificial horses—presumably rather more expensive to make than the human characters, since they're bigger—rather than just ... buying real horses. Horses may not be cheap, exactly (even if we rule out pedigree racehorses and the like, it seems we're still talking $500 -$5000), but we have to assume that this option is cheaper than painstakingly manufacturing the entire animal from scratch. If the concern is one of animal welfare, then presumably the same weaponry constraints that prevent the tourist 'newcomers' shooting one another could be applied to prevent people shooting the horses. Or, to come at the question from the other side: if Westworld is making its own horses, are they also making their own cattle? Dogs and cats? Are the fish in the rivers and the birds in the sky and the flies that so ickily crawl over people's faces also fake?

Three ways of addressing this niggle suggest themselves. One would be to say: get over yourself Adam. It's a show; it's not real. Artificial horses feed into the dramatic distinction between the fakeness of the park and the realness of the humans who interact with it, and that's reason enough. Fair dos.

Still. Two: on the offchance that I'm not in the mood to give up my in-text worldbuilding niggle, let's say: maybe the future of the show is one in which this technology is so cheap that it actually is cost-effective to build your horses rather than buying them. That, though, would be a little hard to swallow: if so, why are characters and specific androids being reused and recycled (as, for example, the manikin playing Dolores Abernathy's kindly old Dad used to live in the hills as a cannibal)? Why is the park so expensive to visit (as one of the tourists implies it is)? Why aren't there parks like this everywhere? Quite apart from anything, the swish high-tech manufacturing spaces with their 3D printers and many attendant technicians, don't look like a cheap operation.

Which leads me to three: what if the horses are artificial because everything in the show is artificial? What if the through-line story reveal will be that the distinction is not real-live human 'newcomers' and artificial androids 'hosts', but between different grades or ranks of androids? That everyone, from Hopkins's Dr Ford on down, is an android? What if the horses are 'made' because the future of the show is one in which natural parturition is a thing of the past? Now that would be a reveal.
Posted by Adam Roberts at 10:15