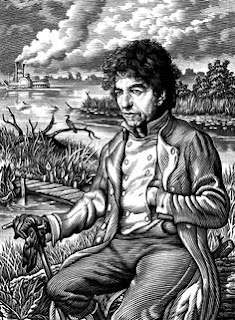 Yet here I am, blogging, and there's Dylan at the head of this post. Why's that, you ask? Well, it's because the whole brouhaha has brought home to me something about the nature of awards. Indeed, as I write it out here it strikes me as such a glaringly obvious observation about awards I'm rather ashamed that it hadn't occurred to me before.

Although we pretend we give prizes to recognise and 'reward' excellence, we actually do it to provoke a particular response of gratitude in people we admire. So when Dylan declines to play the gratitude game, and refuses be all excited about and grateful to the Academy, people's niceness instantly curdles and they start calling him 'impolite' and 'arrogant' and saying he shouldn't get the prize after all—which of course makes no sense, if the prize is about his work. (My respect for Dylan has been greatly enhanced by his reaction, I must say).

I think all this is best framed in terms of the Barthesian 'Author is dead'. I should declare an interest where that notion is concerned, because it seems to me broadly right: the author has to die in order to allow the text, which is what matters, free movement through the world. But the outrage at Dylan's ingratitude suggests that I'm out of step with many people. Many people are libidinally (and, in some cases, financially) heavily invested in the 'idea' of the author, and grow irate if the reciprocity of that is interrupted in any way. Turns out people actually do think George R R Martin is their bitch.
Posted by Adam Roberts at 04:10