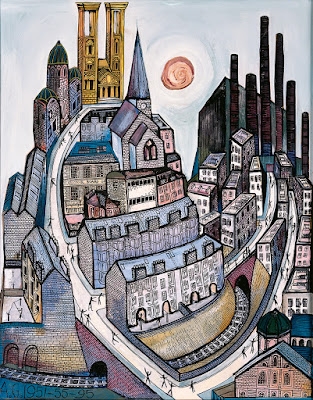 Alasdair Gray's 'The City', from this short Paris Review piece on him.

I wonder if I should revisit Gray. I read Lanark (1981) as a teenager and it spoke very directly to me. I bought it because I was a SF/Fantasy nut, and the fantasy element seemed intriguing; plus I loved the bravura touch of starting a four-book novel with book three. I can remember quite distinctly standing in the Albion Bookshop in Canterbury browsing it, and deciding to spend my hoarded pocket-money buying the paperback.

But my reading experience did not go the way I expected. As a child I suffered badly from asthma (badly enough for it to threaten my life, to be hospitalised with it, badly enough to bend my physical existence around the lines of its force where sport and exercise were concerned) and the mundane half of that novel, Duncan Thaw's pre-war Scottish life and especially his experiences as an asthmatic child, chimed with my own experience like Big Ben's bell. The fantasy elements were fine, too; but I had not previously read, and have not subsequently encountered, a fictional account of what it feels like to be an asthmatic so powerfully true. At any rate, it made me into a fan of Gray. Since then I've read, I think, everything he has published, novels and short-stories both. But with the sole exception of 1982, Janine (1984), which I read in my first year as an undergraduate, and which I still think an interesting novel, none of them have stayed with me. None of them!

My asthma is considerably better now that I'm an adult, partly because I have to a degree grown out of it, mostly because modern medicines are incomparably better at managing the condition than were 1970s-era drugs. But the debility asthma forced upon me had a deep and shaping effect on me growing up, and is therefore still part of who I am. Gasp, wheeze, etc. 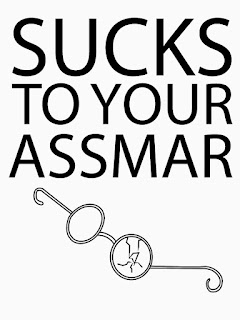 When Orson Welles died in 1985 there was a comedy sketch on British TV premised on the conceit that he had lived his artistic life backwards: starting with sherry commercials and film cameos to raise funds, small-scale bits and pieces as he learned his craft as actor and director, moving onto low-budget adaptations like The Trial, to more ambitious Shakespearian films (Chimes at Midnight, Othello, Macbeth) and, as his skill increased, to technically-accomplished thrillers like Touch of Evil. Finally, having perfected his craft, Wells was able to make his masterpieces: The Magnificent Ambersons and, the copestone to a glorious career, Citizen Kane. There's something of this about Gray, I think.
Posted by Adam Roberts at 02:05