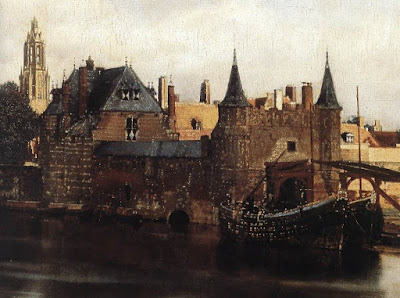 One of my favourite passages in Proust is when the narrator, Marcel, asks himself whether his favourite writer ‘Bergotte’, having died, is now dead for ever, ‘a question to which spiritualism offered no better answer than religious dogmas’:


All that we can say is that everything is arranged in this life as though we entered it carrying a burden of obligations contracted in a former life; there is no reason inherent in the conditions of life on this earth that can make us consider ourselves obliged to do good, to be kind and thoughtful, even to be polite, nor for an atheist artist to consider himself obliged to begin over again a score of times a piece of work the admiration aroused by which will matter little to his worm-eaten body, like the patch of yellow wall painted with so much skill and refinement by an artist destined to be for ever unknown and barely identified under the name Vermeer. All these obligations, which have no sanction in our present life, seem to belong to a different world, a world based on kindness, scrupulousness, self-sacrifice, a world entirely different from this one and which we leave in order to be born on this earth, before perhaps returning there to live once again beneath the sway of those unknown laws which we obeyed because we bore their precepts in our hearts, not knowing whose hand had traced them there.

That ‘petit pan de mur jaune’ is one of the most famous references in Proust, of course; from Vermeer's ‘View of Delft’, painted in the early 1660s: 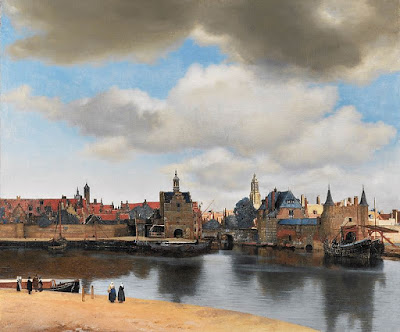 Which detail of the painting is the petit pan de mur jaune? This article makes a good case for the section that heads my post. Proust certainly loved that painting: ‘Ever since I saw the View of Delft in the museum in The Hague,’ he later said, ‘I have known that I had seen the most beautiful painting in the world’. He could be right about that.
Posted by Adam Roberts at 09:23