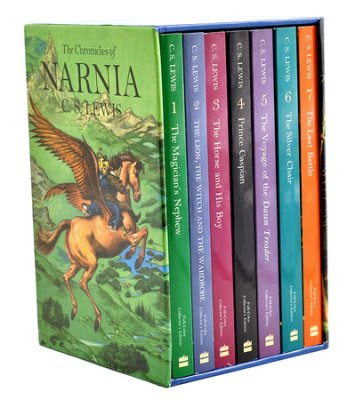 Do we pronounce the word ‘lion’ as a disyllable? I think we do, which leads me to the belated realisation that the title to Lewis's first-published Narnia novel is, prosodically speaking, the second half of an epic hexameter line, the template for which sixfold pattern in Homer, Vergil et al (I need hardly remind you) is five dactyls capped with a spondee. There are many variations on that basic pattern in epic verse of course (although the terminal spondee never alters), but that's the basic set-up. And so we can imagine an epic line continuing, post-caesura:


[the] Lion, the │ Witch and the │ Wardrobe

That's just a curio, I know. But then I started to think about how often Lewis's imagination, reaching for a made-up name to supply his made-up country, lighted either upon something dactylic or something spondaic. Narnia itself is a dactyl, which enables the first-half-of-a-Homeric-hexameter title to this post. Also dactylic are Caspian, Reepicheep, Pevensie. The working title for The Silver Chair was the doubly dactylic Night under Narnia. I suspect, but can't prove, that immersing himself in medieval literature had shaped Lewis's imagination had given him a bias towards the dactylic; Jean-Yves Tilliette notes the ‘almost universal adoption of dactylic verse by medieval metrical poets’ [in Ralph Hexter and David Townsend (eds) The Oxford Handbook of Medieval Latin Literature (OUP 2012), 242]. And this has one small bearing on the question of how we pronounce ‘Aslan’. The name might be a trochee, ARSElǝn, — ᴗ; I don't suppose many people would put the stress on the second syllable, asLARN ᴗ — ; but shouldn't we give both ‘a’s equal weight? That would make the leonine name a terminal spondee, the finishing point to the epic hexameter line and therefore the omega to the alpha-led name, because in Lewis's imagination Aslan must come both first and last? Ahslahn: — —. No?
Posted by Adam Roberts at 00:12