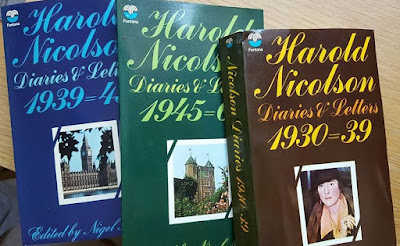 I picked up the above three-vol paperback edition of Harold Nicolson's diaries from a charity shop for 60p (I know!), and have been going through them in a pick-and-mix fashion. My reason for doing so is that Nicolson knew Wells, and the diaries are full of little things that may come in useful for me in completing this project. But, Wells aside, the diaries are full of splendid things. Nicolson is especially good on the claustrophobic awfulness of British aristocratic gatherings.


29th November 1930. Down to Cliveden. A dark autumnal day. Thirty-two people in the house. Cold and draughty. Great sofas in vast cathedrals: little groups of people wishing they were alone: a lack of organisation and occupation; a desultory drivel. The party in itself good enough. Duff and Diana [Cooper], Tom Mosley and Cimmie [ie Oswald and Cynthia Mosley], Oliver Stanley and Lady Maureen, Harold Macmillan and Lady Dorothy, Bracken, Garvin, Bob Boothby, Malcolm Bullock. But it does not hang together. After dinner, in order to enliven the party, Lady Astor dons a Victorian hat and a pair of false teeth. It does not enliven the party.

Some of the anecdotes are a little, as it were, formed; but usually Nicolson redeems himself with a genius touch. So here he is in 1943, by which point he was the National Labour MP for Leicester West.


9th June 1943. I went to the house where I received a deputation of tomato-growers. In they trooped in their country clothes. I took them to a Committee Room and managed to gather together a few other M.P.s Their spokesman addressed us the injustice being imposed on tomato-growers by the Ministry of Food. I took notes. I said a few vague and hopeful things, and one of them presented me with a huge tomato. I do not in any circumstances like carrying objects in my hand, even when these objects are small and hard and dry. I roamed the lobbies miserably holding the thing in my palm as if it were an orb of majesty instead of a huge and squashy vegetable. Then I darted to the kitchen and laid it firmly on the table. ‘Thank you, sir,’ said one of the cooks, as if it were customary for M.P.s to appear suddenly like Pomona and deposit upon their tables the teeming riches of the soil.

That's perfectly nice, but the transition to the next paragraph is better :


I had that evening to go to a conversazione given by the Authors’ Society. As it had taken me some time to dispose of my tomato, I arrived late, and H. G. Wells was already talking nonsense in front of a microphone and a plate of biscuits.

As it had taken me some time to dispose of my tomato is just lovely.


4th February 1934. I walked into Joyce's flat in the Rue Galilée. It is a little furnished flat as stuffy and prim as a hotel bedroom. The door was opened by the son. A strange accent he had, half-German, half-Italian—an accent of Trieste. We sat down on hard little chairs and I tried to make polite conversation to the son. Then Joyce glided in. It was evident he had just been shaving. He was very spruce and nervous and chatty. Great rings upon little twitching fingers. Huge concave spectacles which flicked reflections of the lights as he moved his head like a bird, turning it with that definite insistence to the speaker as blind people do who turn to the sound of a voice. Joyce was wearing large bedroom slippers in check, but except for that, one had the strange impression that he had put on his best suit. He was very courteous, as shy people are. His beautiful voice trilled on slowly like Anna Livia Plurabelle. He has the most lovely voice I know—liquid and soft with undercurrents of gurgle.

He told me how the ban had been removed from Ulysses (‘Oolissays’ as he calls it) in America. He had hopes of having it removed in London, and was in negotiation with John Lane. He seemed rather helpless and ignorant about it all, and anxious to talk to me. One has the feeling that he is surrounded by a group of worshippers and that he has little contact with reality.

He told me that a man had taken Oolissays to the Vatican and had hidden it in a prayer-book, and that it had been blessed by the Pope. He was half-amused by this, and half-impressed. He saw that I would think it funny, and at the same time he did not think it wholly funny.

My impression of the Rue Galilée was the impression of a very nervous and refined animal—a gazelle in a drawing-room. His blindness increases that impression. I suppose he is a real person somewhere, but I feel that I have never spent half an hour with anyone and been left with an impression of such brittle and vulnerable strangeness.

I didn't know that Joyce pronounced Ulysses ‘Oolissays’, and wonder if I'll think of that novel title differently now. Tennyson pronounced Idylls of the King ‘Idles of the King’ and I absolutely refuse to follow him in that. Still: a rather mournful portrait of Joyce, all things considered. Plus Ulysses is a huge volume: how did anybody manage to smuggle it inside a prayer book?
Posted by Adam Roberts at 07:11