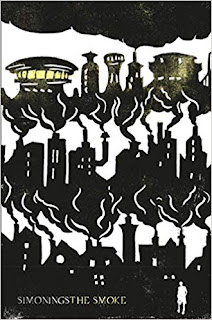 The first time I read Simon Ings's The Smoke (Gollancz 2018) I liked it very much without any great sense I understood what was going on. I often react to Ings's work like that. It's not that he writes strange things (although he certainly does write strange things) so much as there being something ever-so-slightly off-kilter about his strangeness, something to which it's tricky to tune-in, or at least something I find tricky. He doesn't peddle common-garden Uncanny, and is uninterested in the grander varieties of Lovecraftian Weird. Perhaps there are affinities between what he writes and Surrealism, a mode of art that's almost always close-focus, somatic rather than cosmic, cod-psychoanalytic in its oddities rather than just random for random's sake.

In the alt-history of The Smoke the “Great War” ended in 1916 with the atom-bombing of Berlin and the irradiation of much of Europe (a massive eruption at Yellowstone in 1874 had already devastated North America and provoked global winter). But Ings is not particularly bothered by the sorts of games alt-historians tend to play, and his twentieth-century Britain is in many ways unchanged from actuality. The difference is that Ings chucks a magical new tech into his mix, a “biophotonic ray” invented by Russian scientist Aleksander Gurswitsch (a real-life figure, of course). The Gurswitsch ray can reanimate dead flesh—directed at the mud-sunk slain of the Western Front it inadvertently resurrected a caste of beings called “Chickies”—as well as genetically alter flesh to produce new human species. Connectedly, the Jews of the world have reconfigured themselves as the “Bund”, a people who live by sociological principles of collectivity who also happen to be immensely talented when it comes to inventing new technological devices. London, the novel's titular city, is divided between regular Londoners and a large compound south of the river occupied by the Bund.

The focalising character in Ings's narrative is Stuart, a yorkshireman who was previously married to Fel, from the Bund. As the novel opens Stuart has, painfully, separated from his wife, and left their London apartment to come back to stay with his no-nonsense father. Stuart's mother Betty is dying of a debilitating illness, a situation in which both men find it difficult to cope. The family has another son, Stuart's brother Jim, who is an astronaut stationed in Woomera, Australia, where the British are about to launch an enormous “Project Orion”-style spaceship, “HMS Victory”, into orbit. The Bund are ahead of the Brits, though: opting for automated miniaturisation over grandstanding big engineering they have already launched many probes into space, and have even landed robot miners on the moon.

But it misrepresents the novel to lay out all this context in this way. The Smoke fills us in on all this as we read, but Ings is more interested in the odder, more psychological or psychosexual corners and crevices of his story. Stuart misses his wife Fel, and often thinks back to the time they spent in London designing costumes for a sciencefictional TV show called DARE, an Ingsian version of the Gerry and Sylvia Anderson show UFO. He is prey to the sexual glamour Chickies can (it seems) cast over ordinary humans. Stuart always carries with him a little mannikin made of grass that seems to have some occult significance to him. He obsessively reads the “onion-skin pages” of his “mother's Aeneid”—this is how the novel's first chapter opens:


Troy has fallen. The belly of the wooden horse has splintered open in the town square, vomiting forth Greek elites. The gates are torn open and the city, gaping, lost, runs with blood.

This looks forward to the final section of the novel, where [spoiler] HMS Victory is succesfully launched only to be blasted to pieces in orbit by the Bund, killing its crew including Jim. The novel ends with Stuart remembering his wife Fel at night “sitting up on pillows, the reading lamp on, poring over an old book”. The last lines of The Smoke are: “she lifted the book for me to see—Mum's Aeneid—and said ‘the old stories are the best.’”

Stuart's mother Betty is offered the chance to evade her inevitable death by opting for a strange procedure pioneered by a certain Dr Georgy Chernoy: the deal is, you become pregnant (even at Betty's advanced age) with a fetus into which your own consciousness is downloaded, before your original body expires. This results in a population of infants containing adult consciousnesses, painstakingly relearning their motor-skills, and reconnecting with their memories by toddling around scale-models of famous London landmarks. It's very odd and sometimes (as when Stuart has to change his infant mum’s nappies as she shouts adult invectives in the voice of a toddler) pretty disturbing. One final weirdness is the latest high-tech innovation of the Bund: they destroy the HMS Victory to stymie British space ambitions, but they then bring the dead crew back to life, inside the bodies of small plastic toy figures, “Action Man”-style mannikins. So it is that Stuart reunites with his dead brother Jim.

When I first read all this it puzzled me, but in a good way. It stirred my imagination as much as it baffled me. I liked its oddness and richness: Ings is doing things SF rarely does. Then I had occasion to re-read it, something I don't do enough with recent fiction I fear. Looking through it again, I think—I think—I understand what's going on here, now.

The Smoke now seems to me (which it didn’t really, before) a novel about just how strange it is that old clapped-out life can produce new life; a novel about the sheerly existential weirdness of this basic human fact, that novelty comes out of our expiring flesh the way that it does. I'm in my 50s and my bodily being-in-the-world is increasingly run-down and ruinous and crappy, yet my children, engendered of my and my wife's old flesh, are young, vital, fresh. How? It's the weirdness of children as such, here manifested in the Bund’s surreal experiments, dying bodies literally pregnant with their to-be-reincarnated selves, reborn consciousnesses inside plastic toys action-men, the Chickies reborn out of the mud of Flanders. In each case the novel dramatises both the way old people decline, physically and mentally, that the woods decay the woods decay and fall, and the surreal way newness comes into the world, blending surrealism and elegy in a powerful way. 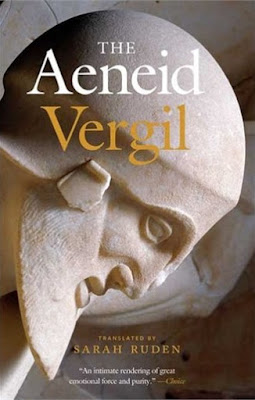 This, I now think, is why the book starts and ends with the Aeneid. A little while ago, in a different context, I blogged about Circe's appearance in Aeneid 7. In book 6, Aeneas visits the underworld, having seen both the punished distorted into tortuous shapes by the consequences of their sinfulness, and the blissful existence of the blessed. Book 7 starts by addressing one more dead person: Aeneas's old nurse Caieta, who is buried on a piece of coastline that subsequently becomes the promontory and town of Caieta. Then Aeneas sails away:

What I love about this passage is its gorgeous uncanny quality. Here's my stab at a line-by-line Englishing of it:


So pious Aeneas, having performed those last rites,
and smoothed the mound over the grave, as a hush
lies over the high seas, unfurls his sails and leaves the harbour.
Breezes blow through the night, white light speeds them on
a gift of the Moon, the sea glitters with a tremulous radiance.
Soon they are skirting the shoreline of Circe's land,
where the rich daughter of the Sun makes
her untrodden groves echo with ceaseless song;
nightlong her shining palace is sweet with burning cedarwood,
as she drives her shuttle, weaving delicate textiles.
And from far away you can hear angry lions
chafing at their fetters and roaring in the deep night,
and bears and bristle-backed hogs in their pens,
raging, and huge-bodied wolves howling aloud;
these are men who, eating her magical herbs,
the deadly divine Circe had disfashioned into beasts.
To save the good Trojans from so hideous a change,
prevent them from stopping on those ominous shores,
Neptune fills their sails with favourable winds,
and hurries them, sweeping them past the seething shallows.

Inadequate as this translation is, it gives some indication of the quality, the vibe, of alluring-terrifying otherness in Vergil's verse. The eerie calls of the magically bestialised men, resounding over the moonlit sea; a yearning and strangeness in the very heart of things. Sunt lacrimae rerum is one of the most famous of Vergilian tags, but Vergil's great poem has always struck me as much more about strangeness than sorrow. It understands, on a deep level, how strange it is that newness comes into the world at all: how empires are created anew out of their fall; how widowers, though wholly dedicated to the memory of their beloved wives, nonetheless fall in love again, marry again, have new children. How strange it is that death, which really ought by definition to be the end of things, somehow—isn't. The Latin novitas means both ‘novelty, newness, freshness’ and also ‘strangeness’, and Aeneas's Roman Troynovant—another name for the Smoke, of course—is as much Strange-Troy as it is ‘Troy renewed’. More, this is for Vergil all bound up with his apprehension of the unfathomable ways divinity interacts with the mundane and the mortal. The strange ways it manifests, the stranger fact that it manifests at all (this also obsessed Graham Greene: a good half of his novels are about what Brighton Rock calls ‘the appalling strangeness of the mercy of God’).

I'm not really comparing Ings and Vergil here, despite this blogpost's title. That would be a pretty invidious move, in and of itself; although it's also true to say that the two approach this matter in quite different ways. Ings outlines, in his various bizarre pseudo-scientific processes and artefacts, a surreal objective correlative for his theme that in turn tends to objectify, or even reify, his strangenesses. Maybe that's part of his integral sciencefiction-ness. For Vergil, though, the strangess of things is a fundamentally spiritual fact of existence, even if that spirit remains a numinous opacity to those of us struggling through our mortal lives.
Posted by Adam Roberts at 23:33