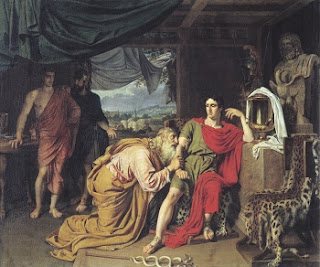 At the end of the Iliad, Priam creeps into Achilles' tent and begs for the dead body of his son Hector to be returned to him (kissing his hands, ‘those terrible mankilling hands that had slaughtered so many of his sons’) and Achilles is—finally—moved to pity. He condoles with the old man, his enemy, offering him this thumbnail of how happiness and unhappiness are sorted in the mortal realm:


There are two urns that stand on the door-sill of Zeus. They are unlike
for the gifts they bestow: an urn of evils, an urn of blessings.
If Zeus who delights in thunder mingles these and bestows them
on man, he shifts, and moves now in evil, again in good fortune.
But when Zeus bestows from the urn of sorrows, he makes a failure
of man, and the evil hunger drives him over the shining
earth, and he wanders respected neither of gods nor mortals.

The counsel here, I suppose, is acceptance: whether we thrive or fail has little to do with our intrinsic merits or efforts and much to do with the transcendent arbitrariness of existence as such. Men, to coin a phrase, must endure their going hence, even as their coming hither, ripeness being all. One advantage Greek religion had over later faiths like Christianity and Islam is that it needed not worry, as so many later theologians have, about the whole Theodicy shebang (for truly it is hard to bring into a harmonious relation the three salients in a posited omnibenevolent and omnipotent God who nonetheless permits evil). The Greek model better fits our sense of the ethical disarrangement of things as such, the mismatch between worth, worthlessness, reward and punishment as they manifest in the actual world. It's not that the Greek gods are chaotic agents. Not at all: their motivations are, in many ways, perfectly comprehensible and predictable (they are, for instance, often moved to generosity by human bravery or beauty)—but they are capricious, egotisical, implacable when wronged.

What strikes me most powerfully about this little passage is the way Zeus first hands out suffering and failure from the urn of sorrows to some poor mortal, and then despises the mortal for his failure. This, perhaps, has the surface appearance of inconsistency, but that's only on the surface. Actually it's a judgement of rather terrifying psychological acuity. We do it all the time, both as individuals and as a society at large: dole out suffering and failure to a person or a group and then look down with condescension and contempt on those people for their failings and sufferings. ‘First we ensure that certain populations are denied the opportunities to make their lives better; then we vocally despise those populations for having failed to make their lives better.’

The urn is a πίθος which is, as L&S say, a ‘large wine-jar’, a word more often used in Homer in the ordinary sense (Odyssey 2.340 and 23.305. where the urns are those from which wine is served). Presumably this is Homer noting that there are a great many evils and blessings to be passed down to humanity, and so Zeus has need of a very large container. But I wonder if the association with wine is relevant: that Zeus is handing out not lots but cupfuls of bliss or misery. The intoxication of life; its hangovers. Wine as joy, wine as poison.
Posted by Adam Roberts at 23:26