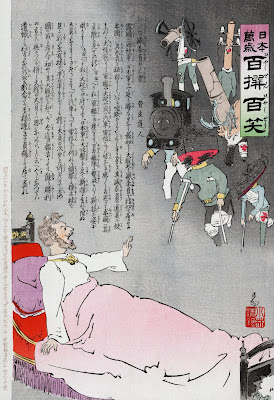 At one point in his autobiography, Speak, Memory, Nabokov remembers being five (in 1904) and meeting one of his father's friends, General Kuropatkin:


To amuse me, he spread out a handful of matches on the divan where he was sitting, placed ten of them end to end to make a horizontal line and said: ‘This is the sea in calm weather.’ Then he tipped up each pair so as to turn the straight line into a zigzag – and that was ‘a stormy sea’. He scrambled the matches and was about to do, I hoped, a better trick when we were interrupted. His aide-de-camp was shown in and said something to him. With a Russian, flustered grunt, Kuropatkin immediately rose from his seat, the loose matches jumping up on the divan as his weight left it. That day, he had been ordered to assume supreme command of the Russian army in the Far East.

Nabokov picks up (as it were) these matches in a further, 1919-dated memory. The Nabokovs are fleeing the Bolsheviks, and on a bridge are approached ‘by an old man who looked like a peasant in his sheepskin coat’. It's Kuropatkin, of course; and he asks for a light. I mean, it probably wasnt Kuropatkin, actually, but Nabokov still insists: ‘whether or not old Kuropatkin, in his rustic disguise, managed to evade Soviet imprisonment, is immaterial. What pleases me is the evolution of the match theme. Following of such thematic designs through one’s life should be, I think, the true purpose of autobiography.’

Kuropatkin's disgrace stemmed from his mismanagement (as many Russians saw it) of the 1904-05 Russo-Japanese War which, of course, Russia lost. That defeat was sealed at the Battle of Mukden fought from February to March 1905. It's a fascinating, surprisingly little-known corner of military history, this; the largest land battle ever fought at that point in history, and a stark anticipation of what was coming in World War 1. General Kuropatkin, commanding more than 340,000 men, fought the 270,000-strong Imperial Japanese Army (Wikipedia tells us ‘the Japanese side alone fired 20.11 million rifle and machine gun rounds and 279,394 artillery shells in just over ten days of fighting: the Russians fired more’). In freezing conditions, and with an army that collapsed into disarray when he tried to manoeuvre it, Kuropatkin was eventually forced to retreat.

The Japanese naturally celebrated this victory, which brings me to the image at the head of this post. It is a 1905 woodcut cartoon woodprint by Japanese artist Kobayashi Kiyochika showing Tsar Nicholas II waking from a nightmare of the broken Russian forces returning from battle. But I love the way those Russian troops have been rendered as strange hybrids of battered human forms and big military tech. Cyborgtastic! 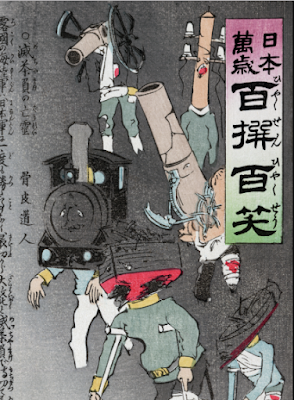