What does "The Times" (of London) think of THE THIS? 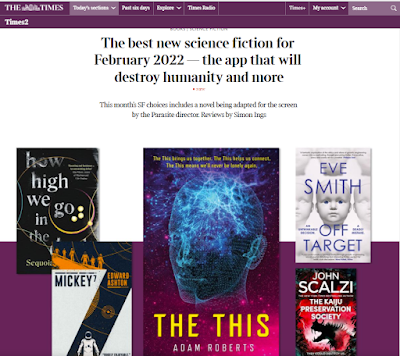 I'm afraid this blog will become a bit repetitive over the coming weeks, as I post various reviews of The This, good and I'm sure bad. But I can't pass over this Times review by Simon Ings, which picks it as their SF book of the month.

Book of the month
The This by Adam Roberts

The This is a new social media app. One that is injected straight into the body, so you can connect with other people without using technology. Its mass adoption leads humanity ineluctably to the creation of a hive mind-like collective. The story of the consequences of its spread is told through the eyes of various characters living at different epochs: Rich, the deskilled journalist; Adan, the phone-obsessed first-adopter; Ewe, the quantum bomb maker.

That this will be anything but a straight story is obvious from the first few pages as our nameless first protagonist is reincarnated through every single human life, past, present and future, and becomes in the process some sort of Übermensch. And this is no mere flourish: at the heart of the British writer Adam Roberts’s dizzying conflagration of ideas sits an unlikely theological treatise titled The Odourless God, which turns out to explain precisely and convincingly, in quasi-anthropological terms, why pointless social media spats happen, why they are addictive and why they will transform us, sooner than we think, into some ghastly amorphous galactic entity.

Roberts, sci-fi’s most outrageous experimentalist, has for quite a while been trying to renew the toehold that religious thought once had on the genre. In The This he has succeeded, with arguments that will bring modern readers (if they have any sense) to their knees in terror.