John Keats and the Toe-Devouring Woman 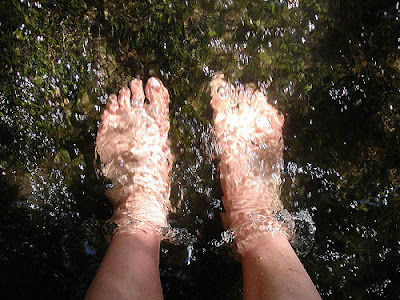 Here's a curious Keatsian story of toe-eating, from a letter to James Rice from December 1819:

As I want the coat on my back mended, I would be obliged if you will send me the one Brown left at your house, by the Bearer … If you do not see me soon it will be from the humour of writing, which I have had for three days, continuing. I must say to the Muses what the maid says to the Man---"take me while the fit is on me.”

Would you like a true Story[?] There was a Man and his Wife who being to go a long journey on foot, in the course of their travels came to a River which rolled knee deep over the pebbles---In these cases the Man generally pulls off his Back. This Man did so; and his Wife being pregnant and troubled, as in such cases is very common, with strange longings, took the strangest that ever was heard of. Seeing her Husband’s foot, a handsome one enough, look very clean and tempting in the clear water, on their arrival at the other bank she earnestly demanded a bit of it; he being an affectionate fellow and fearing for the comeliness of his child gave her a bit which he cut off with his Clasp Knife---Not satisfied she asked another morsel---supposing there might be twins he gave her a slice more. Not yet contented she craved another Piece. “You Wretch cries the Man, would you wish me to kill myself? take that!” Upon which he stabb’d her with the knife, cut her open and found three Children in her Belly two of them very comfortable with their mouth’s shut, the third with its eyes and mouth stark staring open. “Who would have thought it” cried the Widower, and pursued his journey …

Ever yours sincerely John Keats—

What to make of this? Roy Booth reports back from his reading of Simon Goulart’s Admirable and memorable histories containing the wonders of our time. Collected into French out of the best authors (1607), which includes a whole clutch of stories about pregnant women devouring their husbands, part or whole. He ponders what it all means:


Perhaps one can hazard something about the story type. Obviously, it’s about long-suffering men and demanding women, but there’s the myth of Chronos here somewhere: the recurrent feature of the pregnant woman demanding to eat part of the man’s legs, and her unborn child suffering if she doesn’t get it, perhaps speaks of the disabling effect of fatherhood, the man who loses part of his strength to the unborn generation, and has to accept as much.

This sounds about right to me, although having spent two separate portions of my life living with a pregnant woman I am also struck how much the stories Roy reports from Admirable and memorable histories channel a very common experience of pregnancy, viz. weird food cravings. We might say that the craving to eat a husband’s toes is an extreme form of craving, but it’s not entirely outside the realm of possibility. Luckily my toes aren’t very tasty. Actually my wife is oddly phobic about toes, so perhaps that’s what saved me.

Toes might strike you as a trivial matter; but I would suggest that they're an important subject, one which bears further study. No parent who has ever played This Little Piggy Went To Market can doubt that there’s a particular connection between toes and babyhood. Being struck by the sheer delicious edibility of tiny little babies is one of my primary memories of becoming a father—that and the extraordinarily lovely smell to be found on the exact top of their heads. I can’t be the only father to have felt the urge to gobble up his delicious, delicious children. I’d probably start with the gorgeous little toes.

Perhaps eating toes has advantages over eating other organs in that toes seem more disposable; we feel we can do very well without toes in a way we don’t about noses, eyes, kidneys, hearts and so on. We don’t really use them for anything. They’re hidden away inside shoes most of the time, so nobody can be sure if I have toes or not. They embody a sort of pleasurable abjection; a playful sense of the body as dismantleable that goes hand in hand with the sense of the body as, as it might be, mantleable—capable of assembly. Which of course is what happens during pregnancy; the assemblage of a whole human being inside the uterus. Look at that Keats letter again: he asks for a coat to be sent to him. Clothing is a sort of detachable organ. Then he excuses his lack of social interaction because the Muse has been so demanding upon his time (‘the humour of writing, which I have had for three days, continuing. I must say to the Muses what the maid says to the Man---"take me while the fit is on me."’). This notion of a demanding woman metaphorically devouring a man leads him, associatively, to a story about a demanding woman literally devouring a man. The little narrative keeps reverting to detachable body parts, so that Keats says not “in these cases the Man generally gives his wife a piggy-back” but rather “in these cases the Man generally pulls off his Back”, as if his back can be unlatched and dropped to the floor. I said at the top there that the lady in Keats’s letter ate his toes; but actually Keats isn’t so specific:


Seeing her Husband’s foot, a handsome one enough, look very clean and tempting in the clear water, on their arrival at the other bank she earnestly demanded a bit of it; he being an affectionate fellow and fearing for the comeliness of his child gave her a bit which he cut off with his Clasp Knife.

Why ‘foot’, not ‘toe’? Because, of course, Keats’s mind is running on poetry; and feet is what poems walk on—what the poetic line breaks into. What the letter actually codes, I suppose, is a weird masculine dream of poetry as a bodying-forth from oneself, a quasi-pregnancy, a giving birth to new life. The man cuts his own feet off to satisfy the cravings of his poems (cravings for feet). The three feet-eating babies (wide-open mouth, mouth-comfortably-shut, mouth-comfortably-shut) themselves constitute a foot. Famously Keats had so little Greek he could only encounter Homer in Chapman’s translation; but I wonder if he didn’t know, or if he somehow intuited as a poet, that the Greek for toe is dactulos, same as finger (the same applies in Latin, where digitus means both finger and toe). The same word, dactyl, describes the metrical foot that Keats’s three babies embody: stressed, unstressed, unstressed, o - -.