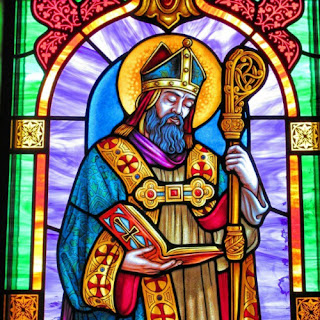 Here's a fascinating Garry Willis NY Review of Books takedown of Robin Lane Fox's recent Augustine: Conversions to Confessions biography. It brings out one thing I didn't previously realise about the saint from Hippo—not just his provincialism, but how much he was shaped by his linguistic deficiency:


The great world of the fourth and fifth centuries was Rome’s Eastern empire. That is where the theological and ecclesiastical action was. The ecumenical councils occurred there—Nicaea (325), Constantinople (381), Ephesus (431), Chalcedon (451)—with little or no participation from the West, which was a lesser world intellectually. The early theological giants were from places like Alexandria, Antioch, Ephesus, Constantinople. Among them were Origen, Athanasius, Chrysostom, Basil, Gregory of Nazianzus, Gregory of Nyssa, and others. They debated and defined Christian teaching, in technical Greek terms, homoousion, hypostasis, prosopon, and the like. The Western church had fewer and lesser men before Ambrose, the bishop of Milan, and Augustine, and of these only one—Augustine—was not in communication with the East, since he did not know Greek. ... As James O’Donnell, the best editor of Confessions, has rightly concluded, Augustine’s Greek was “pathetic”—in fact, Augustine was the only major thinker of late antiquity who was monolingual. O’Donnell measures the deep significance of that fact:


To come at the end of the fertile years that were marked by the literary careers of Athanasius, Basil, Gregory of Nyssa, Gregory of Nazianzus, and Evagrius Ponticus, to name only a few, and to be heir to a Christian tradition that numbered Origen among its most learned and original figures, and to be unable to read any of them except in very limited and partial ways reflected through translation was bad [enough]. But to be cut off from direct reading of the gospels and Paul as well was ultimately very damaging to what he could say and do. Yet he never seems to have been truly distressed by his lack, though there had to be people around him who sniffed at him for it.

There were indeed people who scoffed at Augustine’s provincialism. The well-educated Julian of Eclanum dismissed Augustine as “what passes for a philosopher in Africa” (philosophaster Africanus) and a “donkey keeper” (patronus asinorum) of his little flock in Hippo.

Top-class snark, there, from Julian. So why did Augustine not learn Greek? It appears he had ample opportunity, but Willis thinks he may have figured that not broadening the ground of his learning was the best way to express his particular genius:


Augustine intuited from early on that concentration on his own resources, especially those born out of inner needs, would foster his greatest gift as a thinker—his endless originality. He says that he sought God within himself, mystery seeking mystery. “You were more in me than I was in me” (interior intimo meo). “You remained within while I went outside” (intus eras et ego foris). Starting thus from his own inner place, he humbly invites others to join him in his exploration of the unknown:


Anyone reading this should travel on with me where we agree; search with me where we are unsure; rejoin me if he finds he is astray; call me back if I am astray. In this way, we may jointly proceed along the path opened by love, venturing toward the one of whom we are told, “Search always for his countenance.”

By starting every inquiry from a new place, Augustine surprises us, time after time, page after page, with the absolutely original things he has to say. The eminent classicist Albrecht Dihle, after devoting his famous Sather Lectures to a survey of Greek and Latin writings on the human will, concluded: “It is mainly through this entirely new concept of his own self that St. Augustine superseded the conceptual system of Greco-Roman culture.” The philosopher Gareth Mathews calls De Trinitate “the first ... treatise on mind in the modern sense of ‘mind.’” The Plotinus scholar Paul Henry claimed that Augustine was “the first thinker who brought into prominence and understood an analysis of the philosophical and psychological concepts of person and personality.” Augustine invented an entirely new theology of the Trinity by finding it reflected in the one-and-many aspects of human personality.

This strikes me as, in effect, a profoundly Protestant approach to the grand questions of God, spirit and truth; but maybe that's just my own culture-bias. At any rate, there's something similtaneously compelling and rather alarming in it. Isn't it, in effect, saying 'Ignorance is Strength'? Wouldn't you rather be a philosopher than a philosophaster?

The image at the head of this post, the chap with the attractive blue beard and the giant tangerine balanced on the back of his neck, is a stained-glass Augustine from, I think, Italy. It's from this tumblr, and the details of the specific church aren't given.
Posted by Adam Roberts at 06:45