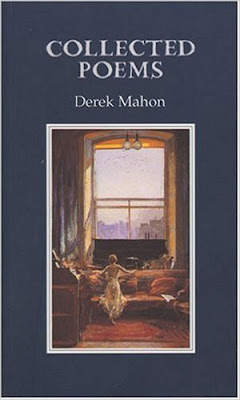 This Paris Review interview with (Protestant) Irish poet Derek Mahon is pretty interesting. I was struck by this section in particular:

Let’s get back to composition itself, which you’ve described as a shaking of the bars, a link moment between the human condition and the song.

Something like that. There’s a certain moment in which that happens, but that’s a very rare occurrence, of course. Although every poem, I suppose, is an attempt. I suppose it’s religious—the notion of art as consolation, the belief that “everything will be all right.” I suppose I can’t finally seriously believe that we’re not immortal. So yes, in some sense everything is going to be all right. That seems a really crass thing to say. But it would be pernicious to insist that this was the be-all and end-all; it’s not. It’s only one of the poetic experiences—although it has a kind of privileged status, I think. For example, in “The Sea in Winter,” writing to O’Grady below in Paros, I assign such a moment to him:


You too have known the curious sense
of working on the circumference—
the midnight oil, familiar sea,
elusive dawn epiphany,
faith that the trivia doodled here
will bear their fruit sometime, somewhere.

That reflects on it.

Would you call the poem, then, any poem, a secular act of faith?

I suppose it is. If we’re going to start from religion, yes, “a secular act of faith” would do. A faith in meaningfulness, a defiance of nihilism—to which one is rather prone, of course.

A faith in meaning as such, not what things means but that things mean. What Browning has his corrupt, gifted (Catholic) brother Lippi say: 'This world's no blot for us,/Nor blank; it means intensely, and means good'. Ah and wouldn't that be fine, though, if it were true?