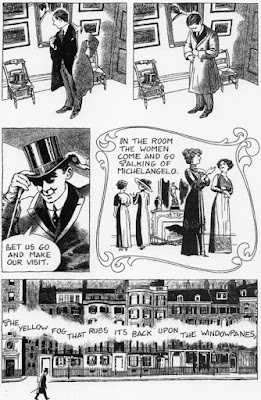 I'm reading, for the first time, H G Wells's semi-autobiographical novel Love and Mr Lewisham (1900). It's very good! It concerns a small, socially insecure but clever young man, with thin arms and legs, who tries to triangulate his love for women with society's larger disapproval and his own shyness. He is a schoolteacher for a while, and yearns in an abortive way after the beautiful Miss Henderson. Then he attends the Normal School in South Kensington, where he yearns after the beautiful, intellectual Miss Heydinger. Here's Wells's description of that location, just before a scene in which Lewisham tries, and mostly fails, to pursue his interest in Heydinger:


As one goes into the South Kensington Art Museum from the Brompton Road, the Gallery of Old Iron is overhead to the right. But the way thither is exceedingly devious and not to be revealed to everybody, since the young people who pursue science and art thereabouts set a peculiar value on its seclusion. The gallery is long and narrow and dark, and set with iron gates, iron-bound chests, locks, bolts and bars, fantastic great keys, lamps, and the like, and over the balustrade one may lean and talk of one's finer feelings and regard Michael Angelo's horned Moses. [ch. 10]

We know that T S Eliot was an enthusiastic reader of Wells (he called The First Men in the Moon ‘quite unforgettable’). He surely must have read Love and Mr Lewisham. Might he, even conceivably, have had this novel in mind when he wrote his great poem about a small, socially insecure but clever young man, with thin arms and legs, who tries to triangulate his love for women with society's larger disapproval and his own shyness? Two accounts, superficially rather different, of lonely men in shirt-sleeves, leaning out of windows.


In the room the women come and go
Talking of Michelangelo.

Which room? Somewhere in London, obviously.
Posted by Adam Roberts at 08:41