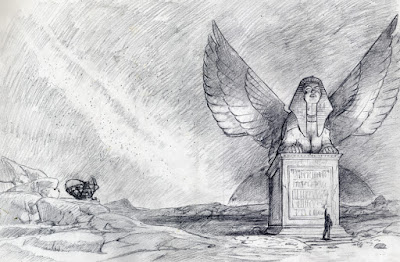 This can hardly help but come across as a little, well, incestuous: linking from one of my blogs to another of my blogs. But here we are. You see, I have started a new blog, which (hopefully) will chart my read-through of all the books published by Herbert George Wells, and this is me drawing your attention to it. I start with a lengthy account of The Time Machine (1895), which moves, in its final section, into a discussion of Oedipus, the Sphinx and that famous four legs/two legs/three legs riddle. Here's my new take on that:


This riddle is also posed by The Time Machine in a more straightforward manner: in the original myth the sphinx describes a strange monster, but the answer reveals that this monster is not so strange; that, in fact, the monster is us. Wells, in effect, does the same, asking: what are these vacuous, diminutive infantile beings, unable to care for themselves? And what are these other monsters? These pale troglodytes that feed on human flesh? These gigantic crabs? This blob of darkness? And once again the solution to the riddle is: they are man. Which is to say: they are you, they are us. It is in this answer that inheres the buried force of the original oedipal riddle, the enduring power of that myth. The sphinx says: ‘I shall describe to you a bizarre-sounding monster. Can you say what it is?’ And Oedipus replies: ‘Le monstre, c'est moi.’ We can speculate that all the previous challengers to the sphinx's puzzle failed not because the riddle is hard, since (famously) it really isn't that hard, but rather because they were unwilling to take that last step, and accept that the terrible beast being described is they, themselves. Rather than accept their essential monstrosity, many people would rather die. That's one of the things this myth is saying, I think.

But there's a second riddle in the Oedipus story, and it is posed not by a sphinx but by the land itself. The fields sicken, the crops die, a curse is on Thebes. Oedipus sets out to solve this riddle too, unaware that it has the same answer as the first one. What is the source of the curse? Oedipus himself. This second riddle both reveals and embodies the short-circuit of existence: man comes from sex, from the mother, into selfhood and along that temporal trajectory sketched by the first riddle towards death, and the mirroring of these two riddles reveals a profound and upsetting truth that all these things are the same thing. Sex is incest, birth is death, existence is a curse, all is folded into all.

My personal reading, here, is that this was always the coded significance of all those legs in the original riddle. After all, we can only claim that a crawling baby ‘walks on four legs’ by confusing arms and legs, a very foolish sort of confusion. Arms are not legs. No: though the answer to the ‘four-legs’ portion of the sphinx's riddle is indeed ‘baby’—which is to say, the answer is the origin of human life, its starting point—the actual solution is more ribald. Just as Shakespeare describes a copulating couple as ‘the beast with two backs’, so the sphinx describes two people having sex as a four-legged beast, two lower-bodies tangled together. It is not until the second riddle, the one at the heart of Sophocles’ play, that we finally understand the two individuals are Oedipus and Jocasta. The remainder of the riddle also anticipates the events of the Oedipus Tyrannus, I think: Oedipus standing alone, after Jocasta's death, in the blazing noon-light of total comprehension; and then Oedipus seizing a ‘stick’, a new limb—the bronze pin from his wife-mother's dress—and blinding himself with it, bringing the darkness, the ‘evening’ which the sphinx promised.

Next up on the Wellsian blog: The Wonderful Visit (1895). Post coming soon.
Posted by Adam Roberts at 10:00